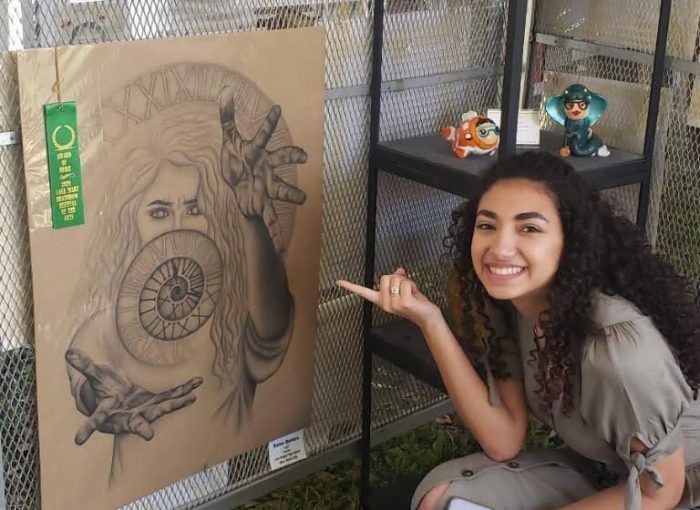 As tensions continued to rise between Christian-Muslim relations in Egypt, Rienet Beshara emigrated from Cairo to Orlando with her family in Fall 2014 to seek asylum.

I spoke with Rienet over a virtual Zoom call. “When I first came here in middle school, I was called an alien. The other kids asked me if I spoke English, if we lived in the pyramids, or if we even had electricity.”

This was Rienet’s first experience with Americentrism, a tendency of U.S. citizens to, either consciously or subconsciously, assume the supremacy of American exceptionalism in comparison to other regions of the world. Rienet later explains that nobody cared to ask about her Egyptian identity and background until she attended the University of Central Florida — particularly her first-year writing courses.

“America is in a box,” she comments. “[Americans] have no idea what else is out there.”

She recounts the first twelve years of her life, living in the sprawling capital of Egypt surrounded by the Nile River. Rienet explains that she attended a private school outside of the city, where she was taught Arabic and English at the same time. Students also had the opportunity to choose a third language — one that could possibly influence their acceptance into a foreign program with international scholarships.

“American schools do not teach multiple languages early on, which was new to me. At a young age, I was already multilingual. However, the British Council taught us British English,” she explains. “That was difficult when I first moved to America because the vocabulary is different.”

Rienet explains that her language and literacy experiences were not only multilingual but also transnational, that she would often remark about her favourite colour or call an eraser a rubber — which often drew inquisitive eyes during earlier years in Florida’s public school system.

While Rienet is fluent in English, she proudly speaks Arabic at her church services and with her family at home.

“I grew up at church where I learned what giving back is all about — it’s humility in action. To give back is to appreciate the value of what you have, to where you want to give others the same thing, so that their hearts can feel what you felt. To me, one of the things I wanted others to feel was love and I felt it from my [mentors], so I decided to give back by serving at my church.”

Seeking asylum is not a simple process and Rienet’s family faced difficulties. They did not want their family to be separated more than it already would be, so they held onto their faith and kept on trying. When the family applied for their U.S. visa, they were all approved together and packed their bags immediately.

The family decided on Florida because her father had a close relationship with a local priest. In Egypt, the priest had been her father’s Sunday school servant (a life mentor that had taught him the faith of the church). Rienet explains, “When I moved to the U.S., I had no one to rely on and neither did my parents; we were lost in an unfamiliar world, but the church with its servants carried us to the shore.”

The Coptic Christian community has long been an integral part of Egypt’s history and culture with the Copts as an indigenous group of the country, from which many of today’s Egyptians have descended from. Egypt’s national identity would be contested for years to come as the process in which Arab nationalism subsequently excluded Copts to emphasize an Islamic identity. Faced with persecution, outbreaks of violence, and the ongoing political marginalization of the state, many Copts had retreated from the country instead of abandoning their faith. At that time, and as public members of the Coptic Orthodox Church, it became increasingly difficult for Rienet’s parents to ensure their family’s welfare.

“We were celebrating my brother’s birthday when the city was placed on a curfew. There were bombs in the street,” Rienet explained that her family had a “giant sleepover” because they were not allowed to leave the apartment for almost three days. “That is something that will never leave my memory. I remember hardly sleeping at night. We made plans on where to hide and how to escape if something had gone wrong.”

Despite periodic outbursts of sectarian violence directed at Copts, the Egyptian government remained steadfast in describing such incidents as just localized disputes as the country continues to emphasize the national unity of all Egyptians.

Today, Egypt continues restoration efforts to improve religious equality such as rebuilding Coptic sites and approving the construction of churches alongside mosques. Although discrimination remains, religious freedom advocates have noted the improvements.

“Identity, to me, is how a person’s past influences who they are today,” Rienet said. “I’m a daughter that left her home but kept the values of her culture and religion alive.”

Throughout her life, art became Rienet’s therapy and meditation.

“It brought me purpose,” she says. Her first biology class in Egypt was about the art of science and Rienet immediately fell in love with the intersection of artistic ability and scientific knowledge. “We drew the anatomy of the heart,” and then, Rienet explains, “it snowballed.”

When Rienet’s family relocated to Florida, she chose art as her elective and kept taking the courses and refining her talent until she was in AP Art in high school, scoring highly on each of her section tests. She went on to earn multiple acknowledgments including two Merit awards at the Lake Mary Art Show, being selected at a Chalk Art Festival for “Best Use of the Medium”, having work displayed at the Orlando Museum of Art, to receiving an honorable mention for the Scholastic Art and Awards program and the National PTA Reflections program, and earning two scholarships.

Currently, as a freshman at the University of Central Florida, Rienet is studying biomedical sciences. A decision some may find drastically different after the many accomplishments previously listed. However, Rienet is equally interested in the sciences.

She describes her first two semesters, which were already difficult to navigate as a new student, heightened by the global pandemic. With classes pushed online, plenty of students have struggled to negotiate time management as academia has blurred the boundaries between professional and personal spaces.

Rienet decided to add a studio art minor to her degree in hopes of carving out time in her already demanding schedule to dedicate to art. “I knew how good I was and I didn’t want to lose it,” she explains. “I want to keep advancing and getting better.”

Typically, art is treated as an elective, and Rienet is very familiar with the attitude differences between her biomedical major and her studio art minor. She recognizes it in popular culture, public discourse, and in conversations with her family over the dinner table.

However, she explains that her family is equally supportive of her artistic ability, while also seeking opportune moments to utilize it. Rienet jokes that her father often pulls her aside to show references of possible house projects, asking if she can replicate them — “About this wall, do you think we can do this?”

But when it comes to finding that fine line between career aspirations and therapeutic hobbies, Rienet often struggles.

“I feel like art is not getting what it deserves,” she describes the complicated feelings many feel when they stray from a traditional career path. Society has placed so much importance on the STEM field that it has often forgotten how dull it would be without art.

“Art is therapy, it’s cleansing yet it can be insightful and makes you think. It’s a beautifully complicated thing that everyone deserves to experience. I feel like I’m not encouraged to take on that route, I’m not encouraged to be different no matter how many times people say you should follow your dreams and do what your heart desires — it’s just not practical. The educational system doesn’t show me a future for art, it only zooms in on science and technology.”

She continues, “When it comes to art education, it’s not deemed necessary and I feel like we’re not really taught about the opportunities in that field the same way we are taught about all the different types of doctors and engineers. So people, including myself, are terrified to dedicate their lives to it.”

However, Rienet believes the tide is shifting. Social media is challenging these attitudes with popular culture often using the arts for expression and escapism. Rienet regularly posts her art online, and actively follows the artist community — which she claims is flourishing on and offline.

“At UCF, there is always an art show going on,” Rienet gleefully shares. “You can see that it is thriving and that something is going on with art in Orlando.” Across the Central Florida area, art galleries continue to pop up while vibrant, prismatic murals have become some of the hottest Instagrammable spots.

Rienet further argues that, while people do different things with their lives, many people use art to relieve stress, improve their lives, or find answers where there are none.

“If you want to have fun, or you don’t want to study, what do you?” Her voice broke into a stride. “You listen to music, you watch a movie, you read a book. You experience art.”

Rienet continues to work toward her goal of attending medical school (“I’m thinking cardio, pediatric, or trauma surgery!”). This summer of 2021, she plans to take her first art class for the studio art minor.

“As a doctor, I can save someone’s life. But afterward, are they going to live? That,” Rienet claims, “is answered through art.”