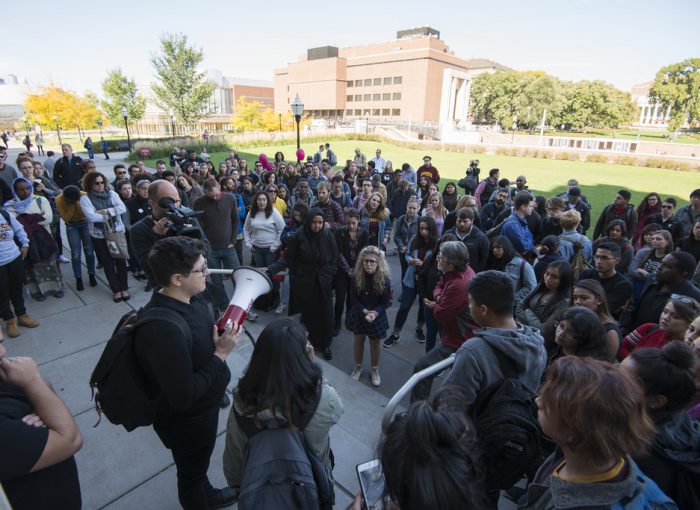 February marked a tumultuous month for UCF as a battle ground for the exercise of the right to freedom of speech, and two of the largest incidents concerned Ben Shapiro’s proposed campus visit on the student body’s dime and a large display by the anti-abortion group, the Genocide Awareness Project.

The week of February 12th, students might have encountered the large public display of graphic images of aborted fetuses accompanied by quotes like “Abortion is the #1 cause of human death in America” and “Shouldn’t all human beings have human rights?” on the green area outside the library. Despite presenting themselves as doing work for the public good (including posting misleading “helpline” numbers around their display that have previously drawn ire) and putting up a warning of the graphic images ahead, the display has drawn responses from the student body that range from skeptical to outraged at their presence, which is protected under the Campus Free Expression Act.

Created in 2018, the Campus Free Expression Act is a law defined by UCF’s Office of Student Involvement as “a new law directed at public colleges and universities in the Florida… to allow visitors and other uninvited speakers to freely use “outdoor areas of campus” for expressive activities.” Though the law also “permits the college or university to establish reasonable time, place, and manner restrictions on such use,” it still protects these visitors and uninvited speakers from significant disruption by students, faculty, or other members of the university.

Despite many students’ reactions understandably being frustrated at the law’s immense protections of these groups – many of which are widely seen as spreading hate – they’re not entirely powerless. The law makes it clear that the First Amendment also allows for counter-protestors, and some students have eagerly taken advantage of that.

Now at UCF, a student organization that “works to provide a strong intersectional feminist presence that impacts our campus, community, and country,” shared a post by UCF’s Planned Parenthood Generation Action that broadcasted a “trigger warning” to tip students off to the potentially upsetting graphic images and presence of the abortion protestors on February 12th. The Planned Parenthood Generation Action group also provided counter-protestors at that display.

Walking around campus when the protestors were out in full force, Leneé Peterson, a student in the School of Visual Arts and Design, recalls seeing “the posters from a distance for the first time,” and being shocked that despite UCF’s image as a progressive community, they’d “allow such graphic and heavily right-leaning organizations take up so much space.”

Despite being glad for the warning signs, Peterson still laments that the “graphic, ill-informed, and disrespectful” images used by the group were so visible. “Especially since we so often have groups of children and middle and high schoolers on campus, I would hate to see these kids go on a college trip to a potential school and then see what UCF allows.”

It all comes down, Peterson says, to what the community is allowing as free speech. “Pro-life organizations are more than welcome, in my eyes, to shine a light on the different options pregnant people have besides abortion, and even the risk factors that come with abortion,” Peterson states. “However, to be spreading lies and scare tactics should not be tolerated. They should not be showing fake pictures of dead babies,often which are pictures of miscarriages, one of the most horrific things I can imagine for someone to go through, or promoting the idea that one’s choices are better or worse than others.”

In terms of what students can do to move forward, Peterson is aware of the difficulties surrounding groups protected under the Free Expression Act. “Still, speak up, let people in charge know that this does not show UCF in a good light. Our campus should feel safe and open to all who come onto it, no matter their voices,” says Peterson. Peterson added that their roles as a multi-disciplinarian artist and scholar informed how they intend to continue responding to groups like this. “Artists should also be researchers, so I intend to continue to research the topic and hopefully try to reason with people the importance of choice, and free will. All options should be open, without bias, to anyone for any given situation.”

Daniela Raymond, a junior majoring in Elementary Education with a minor in Health Science, expresses a frustration similar to Peterson’s. “My initial reaction was annoyance,” Raymond says. “I was not expecting them to be there. Even though I have seen them before, I never wake up expecting to be infuriated by the pro-life protesters.”

“I don’t like it, but I guess it’s fair,” Raymond states, regarding the Campus Free Expression Act allowing groups like these to have a presence on campus. “If I have the freedom to speak my mind and show what I believe in, then so do they. However, some issues I think should not be allowed because of the separation of church and state. Religion is also at the heart of the abortion debate. Therefore, I don’t think these particular issues should be protested on campus.”

Raymond also expressed that the protestors are just misunderstanding on a fundamental level what they’re protesting. “It’s a basic right that women deserve. Just because we have the option doesn’t mean we have to use it. That’s what I think they don’t understand.” She added that their protests are unlikely to have any productive effect, since “for those who are pro-choice, I don’t think pictures and signs will change their opinions.”

“I do like that other student groups are allowed to speak up as well,” Raymond admitted, thankful for some means of response. “This past time they were on campus, I grabbed a small sign from the Planned Parenthood table and held it up as I walked by the pro-life protesters.”

Outside of counter-protesting, though, Raymond realized that, to a certain extent, there’s not much to be done to combat these presences protected under the Campus Free Expression Act. “Because they are protected it’s hard for me to think of a diplomatic way to get them to leave campus. I think the best way to get them to stop is not simply make sure they are not welcome on the UCF campus. If many students got together and truly expressed their disapproval and disagreement of what they are doing, it would be discouraging for them to keep coming back,” Raymond states.

UCF’s resident sketch and improv comedy group Quadruple Stuffed Oreos presented their own take on frequenters of the Free Speech Zones this March with a satirical video sketch entitled “Free Speech,” available on their YouTube channel. In it, the members portray heightened versions of these kinds of presences, from protestors, to activists, to Billy Eichner-esque guerilla interviewers, demonstrating with a comedic hand how many students view these presences.

Generally, abortion protestors are common in the mix of preachers, political groups, and other presences taking advantage of the Free Expression Act. The Genocide Awareness Project is no exception and has a history of visiting public university and college campuses throughout Florida, and this isn’t the first time the Genocide Awareness Project has set up shop at UCF to spread their message. The group has had at least two other recent visits to campus, in 2015 and 2010.

Despite many students being understandably upset at the group’s presence and tactics, the group is protected under Florida’s Campus Free Expression Act, and thus, there’s a limited amount to what the student body can do. However, there are restrictions on the time, place, and manner of use of outdoor areas intended to prevent disruption to university operations and other events. The Office of Student Involvement has an in-depth definition of what constitutes such disruptions available on their website, and if you believe you’ve experienced any in your encounters with these groups, reporting them to OSI may be beneficial in helping eliminate their presence on campus.

Currently, the university can only recommend students avoid areas if they feel they may be upset by them, though many feel this just isn’t enough. As multiple organizations on campus – from Now at UCF to Quadruple Stuffed Oreos – have demonstrated, though, if you’re interested in responding, there are multiple ways to help make your voice heard.