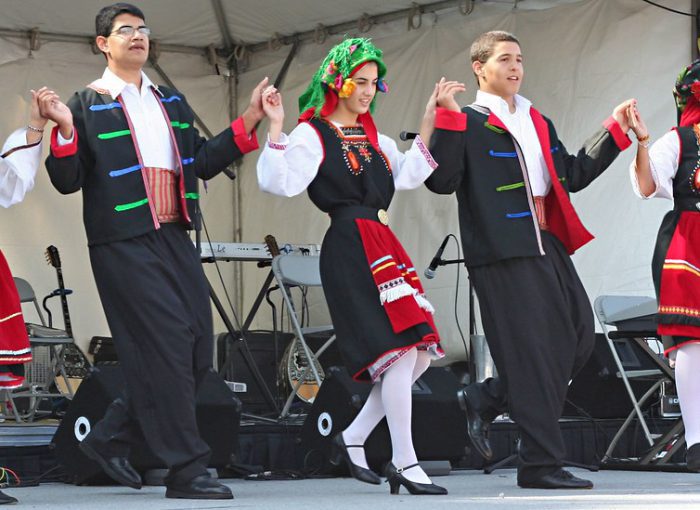 The University of Central Florida (UCF) has a diverse student population from not only around the United States but across the globe. Walking through the Student Union and through the Breezeway, students pass through booths representing the various clubs across campus, from political to cultural clubs to “Greek life” to academic organizations. However, there is another kind of Greek life on campus that is under-represented.

Hellenic students (students whose bloodline comes from Greece) are one group among many in the cultural melting pot here at UCF. While there are religious clubs like the Orthodox Christian Fellowship that many young Greek adults are a part of, there is no other organization at UCF that allows Hellenic students to cultivate and spread their culture. Instead, these students turn to their church to learn about their culture through Hellenic dance programs.

For Greeks, dancing can be a large part of their identity. You can’t go to a Greek wedding, festival, party, or family gathering without traditional Greek music playing. Everyone, young and old, joins in to dance. Greek dancing is primarily done in a circle formation with hands held up together in a “W’ formation straight down or with arms linked straight out at shoulder level. Movements can range from jumping and skipping to slow, balanced steps. Arms are often swung or maneuvered to accent the footwork or rhythm. Many people are familiar with the Cretan style of dancing, with flashy jumps and kicks and quick steps. A lesser-known region, in contrast, is Epirus, with slow, syncopated movements.

The national dance of Greece, called the Kalamatiano, is known by virtually every Greek and is the staple at Greek weddings and festivals. It has twelve steps grouped into threes of “long, short, short” steps and is danced in a “W” handhold. Greeks and non-Greeks alike join together at festivals to attempt this dance, with varying degrees of success. But with enough ouzo, it doesn’t matter what you look like, as long as you are enjoying yourself. As is the Greek way, everyone is always welcome on the dance floor.

While this light-hearted version of dance is at the heart of all Greek dancing, formal dance groups take dance culture very seriously. When studying for a new suite of dances, they take a region and narrow it down as far as to a single village. From there, groups watch videos, study traditional song lyrics, and bring in instructors from Greece to teach the dances properly to fit  the specific style of the region. Whether a dance is flat-footed or on your toes, bouncy or smooth, serious or playful, the style depends on the specific area the dance comes from and the life experiences of the people who created it. One dance, called Mihanikos, is a men’s dance from Kalymnos that depicts a man injured from sponge diving, the main source of income on the island. In the beginning of the dance, he stumbles and falls trying to move with his cane, but when the music picks up, he finds the strength to dance and skips across the dance floor.

In Orlando, some Hellenic students are a part of the Hellenic Dance Troupe of Holy Trinity Greek Orthodox Church of Greater Orlando. This group dances mainly for the annual Greek festival in the beginning of November and for competition through the Hellenic Dance Festival, competing against groups from the entire Metropolis of Atlanta, roughly the southeast region of the country. Groups compete to show the best representation of the region they chose while coming together in fellowship through the church. On the Hellenic Dance Festival’s website, they define their goal as, “to bring Orthodox families together through dance, music and fellowship to perpetuate our rich Hellenic Orthodox Tradition.”

The Hellenic Dance Troupe of Orlando has competed at the Hellenic Dance Festival for many years, and this year, they won the Choral Award for the Advanced Senior category and a costume award for Pontic costumes made by their instructor. Most of the dance troupe’s costumes are hand-made. These elaborate costumes are sewn and embroidered by members of the church to represent the styles of specific regions. A typical female costume has at least two to three layers (but often many more) and an apron, a jacket, and a headscarf. A typical male costume may have pants or a warrior’s skirt called a foustanella, a shirt and vest, a sash, and often a hat or other headwear. Jewelry often includes gold coin necklaces or crosses, gold or silver decorative belts, and coin jewelry attached to the apron. Each of these pieces varies greatly from region to region. The groups proudly wear their costumes knowing the hard work and research that has gone into creating them.

Kartsonis is a part of Marching Knights and balances it with church and dance on Sundays. In addition to performing, she also teaches dance to one of the youngest groups, the Asteria, whose name means “little stars.” This group is made up of elementary schoolers and is the youngest competitive group from Holy Trinity. While it can be challenging, Kartsonis loves spreading her culture to the kids. When asked what she loves about Greek dancing, Kartsonis said, “Greek dancing is one of the things that makes me unique, different from the rest of society. Not many people can say they are part of the dance troupe that correlates to their religion/culture.”

Another UCF student, Elektra Burnett, also balances school with teaching and dancing. She teaches the middle school group from Holy Trinity, Filarakia. “Greek dancing is my favorite hobby, and as an anthropology student I am learning how to see my own cultural practices in a new way,” said Burnett. She goes on to say, “I am glad I have a strong sense of culture, and I love to share it.”

Any Greek Orthodox students are welcome and encouraged to join the Hellenic Dance Troupe, which holds practice every Sunday. All students are welcome to visit the Orlando Greek Festival at the beginning of November at the Holy Trinity Greek Orthodox Church in Maitland, Florida. As they like to say, “be Greek for a day” with authentic food, live dancing, vendors, and sweet treats. This year this festival will be held November 6th through the 8th. Everyone is encouraged to come out and get a taste of the Greek culture.

UCF student Michelle Niarhos, a former member of the Grecian Odyssey Dancers of Melbourne, Florida, said that Greek festivals are something she looks forward to every year. “It feels great to come back together and dance,” she Niarhos. “It’s so nice even though I’m away at college to get together with the people I grew up with who all have the same passion. We embrace our culture together, and it’s exciting seeing our culture grow beyond our Greek community.”

Being active members of the Greek Orthodox community helps UCF students to gain valuable knowledge about their culture, help their community through volunteer work, and spread the joy of dance to the youth of the community. It is vital for UCF students not just to be involved with their school but with the community of Orlando as a whole. Feeling involved in the Orlando community empowers students to give back and contribute to building a better future. Orlando is a diverse and beautiful city, and UCF students should strive to make it better. By exploring each other’s cultures, we spread love and understanding while keeping alive traditions that may otherwise be forgotten.