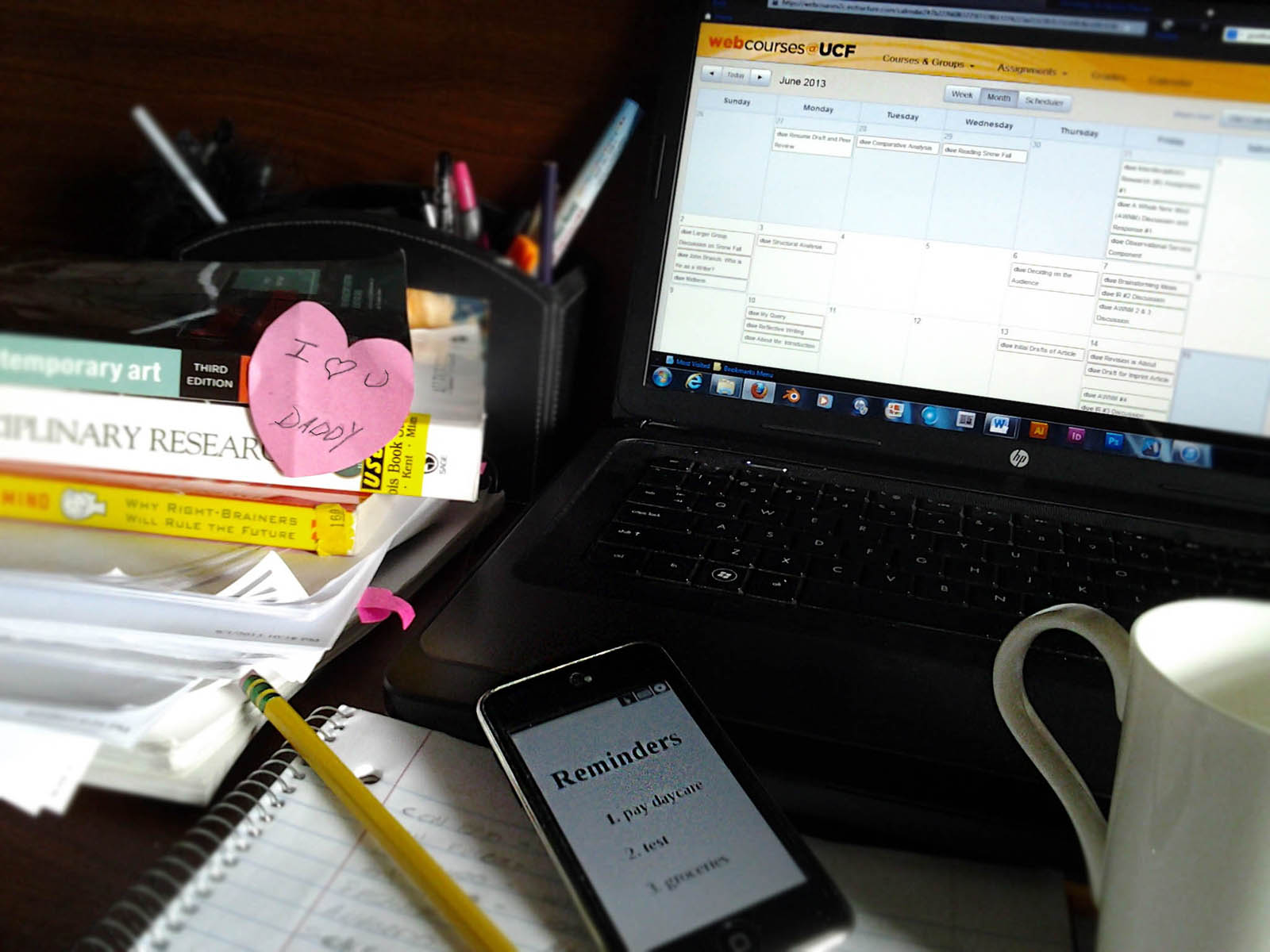 Are you over twenty-six and attending college? Do you work full time and go to school part time? Do you have a family to support and still put in time to work on your classwork? If you answered yes to any of these questions then you are a non-traditional student.

Being a non-traditional student myself, I realize how hard it can be for these students to manage college life and home life. However, what do other students think of this diverse student population at UCF? To answer this question, and get a different perspective, I have communicated with two UCF seniors to get their opinions.

The discussion starts with the former. As mentioned earlier, she is a soon-to-be graduate of the doctoral program in the College of Education. She has defended her dissertation, and is officially a doctor of education. Dr. Amy Flowers has a full time career as an assistant principal of an elementary school, while she has been finishing her doctoral degree.

Since she had mentioned a support system, I asked if she was aware of the Non-Traditional Knights (NTK) Project. Regrettably, she had not heard of NTK. NTK is a project specifically designed for non-traditional students. According the article, Project Helps Nontraditional Students Connect, by Ryan Ernde, “The NTK Project is an interdepartmental collaboration of faculty, administrators and students who seek to assist students who don’t subscribe to the traditional student lifestyle.” It is a good site which helps non-traditional students connect and learn about events which happen around campus.

It is hard for non-traditional students to get involved in campus activities. I asked Dr. Flowers’ opinion if she agreed with this.  “Yes, of course. They have more on their plate and more of a financial burden. It also creates an impact on the family. If they work full time it is hard maintaining school and kids as well, if they have any. Just look at you and your wife.  You have a daughter and both of you are in school. I know it’s got to be hard.” I agreed with her, because of the countless hours I put in at school and work; it was hard to see my family.

I know it is hard for most non-traditional students. The question is, with knowing it is so hard for most, why do they go back to school? I asked Dr. Flowers why she decided to go back to school, “I wanted to go back to college for 3 reasons: to advance my career and build my knowledge, to prove to myself I could achieve a terminal degree, and to make my dad and family proud…I’m the only one to complete college.” I then asked her if she could change anything about her educational career, what it would be. She answered, “I wish I could have gone back for my masters sooner. I graduated college in 1992, but I worked on my masters from 2007 to 2010. It just made it harder.”

At the end of the discussion, I asked if she had any words of encouragement. She said, “Believe in yourself, and set goals, then work hard to achieve them. But develop your support system through professors, peers, and family; if you don’t, you may struggle with the demands of completing a degree as a non- traditional student.”

My next discussion was with twenty-two year old senior, Sara Verhoestra. Raised by a single mother, she says she is independent and hard working. Being a traditional student, she adds an interesting perspective to what it means to be a non-traditional Knight.

She had some of the same ideas as Dr. Flowers when it came to non-traditional students just starting school. She said, “They have a long road ahead of them, because going to college is not going to be easy. Determination and the drive to finish are crucial because the non-traditional college students is going to have some other aspect of their life that is going to make it a long a bumpy road to the finish line.”

Sara had not heard of the NTK project either, but she did say, “They [non-traditional students] can really go anywhere. UCF offers so many clubs and intermural sports teams; there is bound to be some sort or organization that is going to fit their schedule and budget.”  On the other hand, she says, “The non-traditional college student usually has other things on their plate other than just going to school.” She also said, “They have to work full time and go to school, and they choose to do both and stick it out because of that desire already inside of them.”

Besides being diverse, some non-traditional students value their family life and have to juggle home life and school. I asked Sara, if she had a family of her own, did she think her work ethic would change. She said, “I think if I had a family of my own it would only make me work harder. It is one thing to want a good life for yourself, but wanting a good life for my family is the sole purpose of hard work. If I had a family now, I would still do the same; except, probably work three jobs instead of one. One day it would pay off and that makes it worth it in the end.”

At the conclusion of the discussion, I asked Sara what she felt was most necessary after graduation, she said, “I feel that in order to be successful you have to have an open mind and determination. An open mind because you have to be willing to try new things and accept new people. Everything in life is changing and if you aren’t willing to adjust to the changes, then you are going to become stuck. And the determination, because nothing comes easy, you have to be in it for the long haul; the good and the bad. Eventually you’ll get there.”

Sara believes, like Dr. Flowers, that being a non-traditional student is a hard road. But they also both believe it is worth it in the end. So, to all non-traditional Knights, stay the course and in the end the reward of earning a college degree will be worth the sleepless nights, family missed, and money spent.

To view the NTK Project website go to http://osi.ucf.edu/ntk/