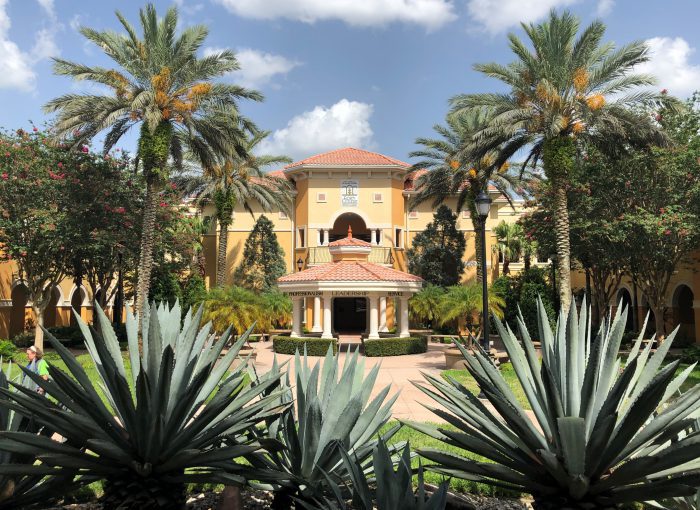 When we think of UCF excellence we may refer to several of its engineering and technology programs, its repeated champion football team, the UCF Knights, or even its prominent community presence and charity work. Any of those would be spot on, but most of us would likely miss what is easily one of the institution’s biggest stars. In fact, most main campus students are not aware that UCF excellence extends all the way out to Universal Blvd, and right up to UCF’s Rosen College of Hospitality Management. Earlier this year, Rosen College ranked as one of the top five colleges in the world for hospitality and tourism by the Shanghai Rankings Academic Ranking of World Universities.

With over 3,000 undergraduate students, more than $325,000 in scholarships awarded annually, 72 full-time faculty members, plus 35 adjuncts and 64 staff members, Rosen College holds an astounding 97 percent job placement rate upon graduation while also holding impressive retention rates, like a 96 percent for First-Time-in-College (FTIC) students. This makes it one of the fastest-growing and most important universities in the hospitality industry worldwide.

Rosen College visibly strives for excellence in embodying the concept of hospitality and tourism in its entirety – right down to its very appearance. Immediately upon entering, a person could be forgiven for mistaking the school for a resort. With its well-maintained landscape of state flora and palm trees, gorgeous clay roofs reminiscent of Mediterranean structures and colonial-style street lamps, the campus feels almost like a Florida destination vacation spot. Even indoors, walking up to the front desk was akin to checking into a hotel. The professionalism of the staff was most accommodating, and their friendliness was warm and genuine. The clear effort put forth into the details, right down to the very way the place is ran, speaks volumes of the school’s dedication to be top in their field.

However, it is not all about merely looking the part. Dr. Youcheng Wang, dean at Rosen College, said many factors contribute to Rosen’s success: their curriculum, the faculty members, and the internship programs.

The Rosen College curriculum is often referred to as “cutting-edge.” Lori V. Safford, MA, Director of Student Services, explained their program is enriched through two main sources: one is the input from partnerships and field expert advisory boards which exist for every discipline, and the other is the institution’s own active role in research contributions to the industry. The data gathered from these relationships and studies continuously keeps the educational material fresh and relevant, shaping what the university needs to prioritize or eliminate from their curriculum to keep it streamlined, competitive, and influential across the world. The research published by Rosen members has given them an active voice in the industry that has helped raise the university’s prestige, as their work is well recognized and respected by their peers and its impact is felt globally. In effect, the school’s upsurge in the ShanghaiRankings was largely attributed to the over 130 research articles submitted by the school’s faculty within the last year.

Yet Dr. Wang said that even the best curriculum is of little worth without the best people to deliver it. He attributes the school’s success secondarily to Rosen’s faculty and staff. Dr. Wang said Rosen is gifted with a “diverse, very strong and dedicated” team of 72 faculty members, representing 17 different countries. This brings an international perspective to an international business, which is something that Dr. Wang said is “very important to understand,” as it is essential to the very nature of the industry. With the highest number of international students at Rosen College, Dr. Wang suggested that UCF should no longer be considered a local, regional, or even a state college. He is convinced that UCF should be rightfully considered an international college at this point.

The third aspect that Dr. Wang said should be credited for the recent success of Rosen College’s performance is their internship program, which he said is “very rigorous and demanding, but also exciting.” Students are required to take on a minimum of three separate internships before they can graduate, which most students do while simultaneously completing their courses. Dr. Wang said this prepares them well for the job market, teaching them time-management and other basic skills for the operation of the hospitality industry. Upon graduation, Rosen students already have the knowledge and even the experience necessary to be considered adequately marketable for career advancement.

There is no question that Rosen College seems to have cracked the code of excellence in student and industry leadership, managing to become one of the biggest names across the hospitality and tourism spectrums. The school’s assistant director of Student Services, Vanessa Blackmon, however, thinks that one more aspect of their program deserves special recognition for finding creative and productive ways of dealing with adversity.

Running an institution of higher learning comes with its own sets of complications. Particularly concerning is when the pressures of college reflect negative impact on students. With thousands of individual minds in their hands, the Rosen College faculty and staff invest a great deal of time and energy conceiving new ideas to promote student engagement. One program that has proven especially significant to them has been POMP, the Peer Outreach Mentoring Program. Blackmon herself spearheaded the program a few years ago but said she did not imagine it would take on a life on its own like it has.

POMP is Rosen’s first mentoring program. It consists on getting students involved academically, socially, and within their own community in hopes to engage them on a path to individual progression and ultimately success. The mentees are conditioned to later become mentors themselves once they have met their academic goals. Originally created for retention of at-risk students, POMP is now 130 members strong and open to all interested Rosen College students.

“POMP is unique in that the members, fondly known as POMPers, have a plethora of opportunities to take ownership of the program. These opportunities to truly invest in the program, creates an environment of partnership, community and pride. It also fosters self-efficacy, leadership skills and promotes campus engagement allowing them more exposure to networking, team building and diversity,” Vanessa Blackmon testified.

POMP has exceeded retention and graduation rates, according to Blackmon, as well as expectations. Over half of students on academic probation get off probation while in the program, and over 81 percent raise their GPA. On their own initiative, POMPers joined the Knight-Thon efforts and, within only three years, had become the highest fund-raising RSO in UCF, having raised over $36,000. Blackmon considers this one of their biggest accomplishments, because it was student-driven tangible proof that the outreach program works. She said POMP is a prime example of how Rosen College approaches adversity as opportunity and turns a point of difficulty into a point of pride.

“That is the whole point of the program; because there’s correlation between being engaged on campus and graduating,” said Blackmon. “So, yes, it’s about engagement, it’s about giving back to the community and the campus, but it’s also about developing relations and bettering each other – not just academically but professionally and personally.”

While prestige and stats certainly look good, in the end, the true evidence of the work lies in its fruits, the students. Percentages and rankings cannot measure individual success stories like that of Nadley Nazaire, a 21-year-old hospitality management major who graduated Rosen College in 2018. Nazaire has already been promoted and transferred to the Four Seasons Hotel Silicon Valley at East Palo Alto, California, as their new Assistant Front Office Manager. Nazaire was a member of POMP and of the NSMH, or National Society of Minorities in Hospitality, as well while he was a student at Rosen. He attributes a lot of his readiness and success now to participating in these leadership programs.

“NSMH was the best thing that ever happened to me at Rosen,” said Nazaire. “A club like this brought me around many eager future leaders who want to work hard and be successful. Rosen made it a comfortable space for us and provided us the resources to excel.”

Nazaire mentioned how the Rosen College required internships help students identify their strengths and weaknesses and that they always emphasized the importance of building relationships. He also made the point, like Dr. Wang, that the entire Rosen system would be nil if it were not for the support of the faculty and staff. When referring to his mentors, career coaches, and professors, Nazaire shared they often meant the difference between failing or succeeding and feeling stressed or good about your work. “Rosen surrounded me with the best of best people who I could vent to and learn more about myself in order to develop,” he said.

Another student, Celia Wilkinson, of the class of 2016, is part of the Rosen College success story. A non-traditional student, Wilkinson was also a hospitality management major who served as Secretary and later as President of NSMH. Upon graduation, she was able to secure a spot in the Corporate Management Training with Hyatt Hotels Corporation and was hired on. She is now an Event Planning Manager at one of her top choice locations in Washington DC. Wilkinson said attending Rosen College was one of the best decisions she ever made.

“This organization [NSMH] really propelled my career, as it allowed me the pleasure of meeting key people in the industry from a variety of companies,” said Wilkinson. “I was able to secure an internship with Hilton Hotels while attending one of NSMH national conferences, which resulted in me being promoted to Supervisor in the Food and Beverage Department.”

She said there were hardly any surprises for her going into the industry as she was already experienced with every aspect of hospitality, making her career ideal to skyrocket from the beginning. Like Wang and Nazaire, Wilkinson also attributes excellence at Rosen to the program, the faculty and staff, the internships, and the clubs. Since this seems to be the formula for success, Rosen College is determined to continue to improve their already excellent, world-renowned program.

“We are consistently looking for innovative programs and initiatives to ensure that we can enhance our portfolio and programming. Our most recent initiative to support and build engagement among FTIC students is the “I Will” legacy program to support wellness, involvement, leadership and learning among our FTIC population,” said Safford. “That’s a new initiative that we’re going to kick off with a tailgate party. The focus is to build and foster long-term relationships among FTIC, hoping that they can carry on through their freshman, sophomore, junior years and so on.”

Even in the face of all this, Dr. Wang still does not think the Rosen College of Hospitality Management is doing anything that should not be expected. As if striving for excellence should be a given, some natural impulse to which we should merely succumb our will. He may have said it best when he shared an exchange he had with the UCF provost.

“We do different kinds of things here. Even the provost asked me several times, ‘What is your secret at Rosen College?’ And my candid answer was at that time, ‘We don’t have many secrets here. Because if we had secrets, we could not hide them within the university. If there is one secret, our secret is here,” Dr. Wang said, pointing to his heart. “Right here. Because all of our faculty and staff members treat their business very, very seriously. They care about their students. They do their business with their heart. So, it’s really about the passion and professionalism which drives the operation of the [Rosen] college on a daily basis.”

With this perspective, excellence, then, is already inside us. We just need to find the right place where we can be allowed to grow and do what we love. 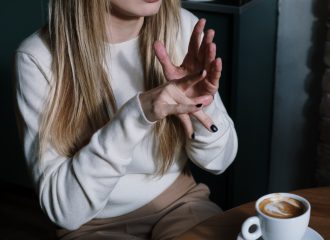