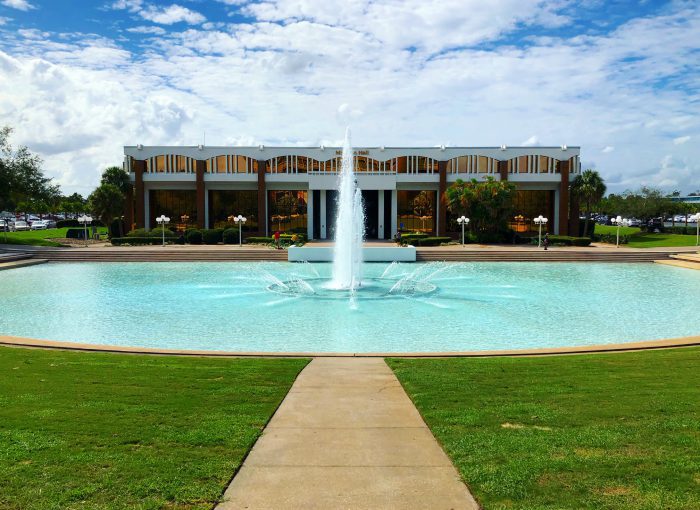 The pond is hard to miss, even on a campus as large as ours. The reflecting pond is hands-down one of the most recognizable spots on campus. Interestingly enough, while it is very common to hear it referred to as the ‘Reflection Pond’ or maybe even ‘Reflecting Pool,’ the fountain’s given name is the Reflecting Pond.

What is now a gorgeous landmark was once a murky and mud-filled pit back when the campus was brand new. This was obviously an eye-sore, so what was their new plan? The school officially began constructing the Reflecting Pond during the first few years of classes, and it became one of the first campus landmarks built and completed.

Construction of the pond was officially completed in the year 1970. It measures 182 by 120 feet at its widest points and goes from 18 inches to 4 feet deep. It also holds a bolstering estimated 228,000 gallons of water, and is located right outside the John C. Hitt Library and Millican Hall.

One of the most notable visitors to the pond was President Richard Nixon and his wife in 1973, when he came to deliver the first ever commencement address. A video of his speech remains on NixonFoundation.org  for any person to view. For the first few commencement ceremonies, the pond was actually drained of water and, instead, filled with energetic graduates. In the beginning years, activities around the pond were very restricted, for fear that it would become a place for demonstrators. Now, it is even opened to Homecoming Pep Rally party goers. Another interesting fact is that, in its early years, one of the ‘fairways’ of a campus-official disc golf course went right over the pond.  All that flies now are birds and Florida breezes.

Graduating students love to take and post pictures of themselves in their gowns in front of the Reflecting Pond. Actually, it’s not uncommon to see them standing in the pond rather than in front of it. While this is technically not allowed (with the exception of specific school events), it has still managed to become a tradition among graduating Knights.

In 1996, the pond was completely drained and the floor was painted a bright blue instead of gray, in order to make the water look clearer. In the year 2000, the pond’s single spout was replaced with the three fountains that all work together, ones that we still have.  Not only did this change make an aesthetic difference, it also helps the pond’s circulation and reduces algae. The final repair was officially finished in spring of 2018. The cost of all these repairs is estimated to be about $1 million.  What needed to be fixed were the pipes leading to the fountain’s pumps, which caused the filtration system to spring several leaks. To make things even more complicated, when Hurricane Irma hit, water flooded the electrical control areas beneath the pond. University spokesman Mark Schlueb declared at the time, “It’s important to our students, and really to administrators as well, to make sure this is brought back to its glory.”

A giant part of today’s traditions is the event famously named Spirit Splash. While there is some skepticism as to how it actually began, it’s been said that it started unofficially in 1995, when the president of the Student Government Association was pushed into the Reflecting Pond and the rest of the cabinet followed suit. In 2011 it was then named “Best Campus Tradition” by the National Association for Campus Activities, and Florida Leader magazine called this event the best university tradition in the state. In 2018, ESPN’s Will Reeve even joined in on our tradition.

Today’s Spirit Splash event consists of filling the pond with rubber ducks for students to clamor in and try to victoriously claim before someone else can. Free shirts are given out to the people who come out and participate. The Spirit Splash always takes place the Friday of homecoming week, one day before the game.

The Heart of Our Campus

The Reflecting Pond is a spot on campus that holds more spirit and heart than any other. With its rich history and mesmerizing view, it is an absolute must visit. Whether you want to sit and study, snap a quick picture, get your feet wet, or just enjoy the view– this was made for you. Make the most out of your college years by adding a visit to the Reflecting Pond to your weekly routine.

(The Reflecting Pond in its early years)