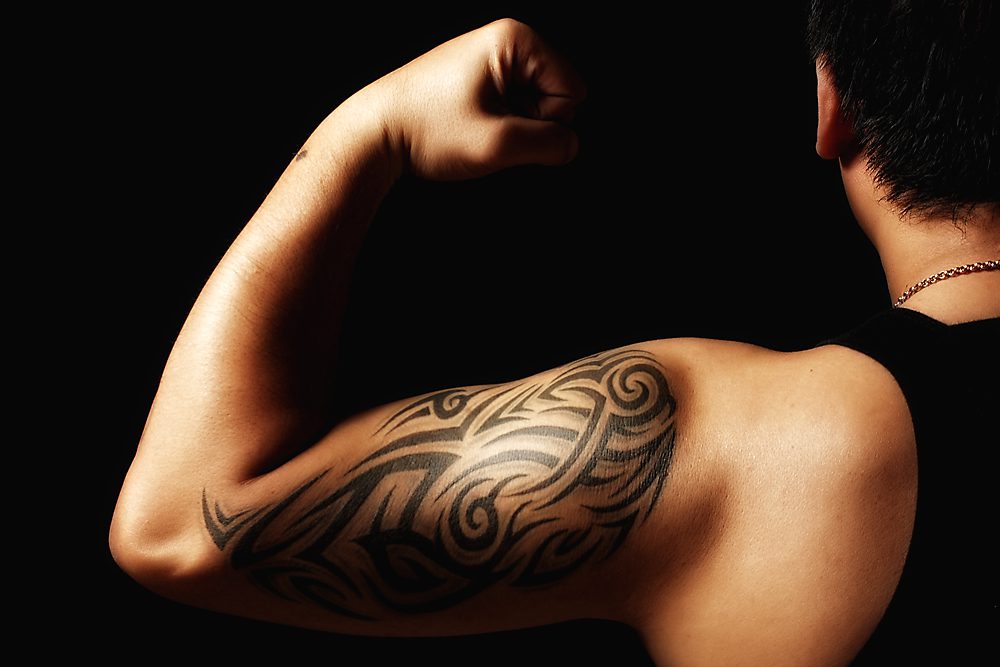 “Music always makes me feel better and less alone. It lifts my spirits and it has a way of speaking to me like no one else can. It makes me emotional and it continues to evoke a passion in me that makes me feel alive.”

Tattoos have been called many things: rebellion, stupidity, naïve youth, abominations, defilement of the perfect skin, disrespectful, crude, not thought out, obnoxious, etc. All are words used to condemn the art form, but what many don’t realize is tattoos are another form of expression and a reminder of past people or evernts. Tattoos can remind you of stupid things that bring a smile.  Sometimes, they often remind people of hard times they’ve faced in order to push through an even harder time. Reminders are an abstract concept left to the mind to interpret much like music.

For example, you’re sitting in your car and the lyrics “walk the city lonely, praying that the sun may never rise,” (“MIA” by Avenged Sevenfold) starts to creep through the air striking your eardrums. They travel into your brain, and slowly start to seep into your subconscious, plucking at old memories. You start to tear up before quickly changing the station. A catchy beat starts to sync effortlessly with your heartbeat as you start to smile and sing “one tribe, ya’ll,” (“One Tribe” by The Black Eyed Peas). Suddenly, everything starts to flash back to a time when you were jumping along, friends surrounding you and everything was perfectly fine, not a care in the world.

Getting a tattoo to keep one’s memories, dreams and expressions, (much like the lyrics of a song) is not an attempt at rebellion.  Sitting in a God-awful chair for hours on end just to put a constant reminder on your body isn’t easy.  It hurts! It’s expensive! Why would you do that just to express yourself or relive your memories?

There is more to the tattoo than sitting and enduring the pain. There is a feeling of completion and satisfaction. The piece that you have chosen, the one thing that you have complete control over finally culminating your very essence, now rests on your body as a permanent representation and reminder. It tells a story.

In an interview, Christina Campbell asked, UCF student Kristin Bartlett the questions every skeptic and prospect afraid of the pain and wary of the cost wants to know: What makes the negative worth-while? What has benefited your life? What’s the appeal behind the growing new trend of an ancient art form?

Christina: How do the permanent representations of the music you love enrich your life?

Kristin: They stand as a reminder of certain periods in my life that I don’t want to forget and reminding me that music will always be there just like the tattoos.

Christina: How does music keep you inspired?

Kristin: It reminds me that I’m never alone. There is always someone out there that has gone through the same emotions that I have. Felt the same things and I can always turn to music to comfort me because there is always a place for me to turn to when I feel like no one understands. It inspires me because I can always relate to the many artists that I listen to time and time again.

Christina: How were you inspired to get these pieces (Parvati, geisha, abstract design)?

Kristin: Parvati—in high school, I was going through a lot of typical teenage problems and at that time I discovered 70’s artists and Jimmy Hendricks was one of the artists that really stuck out to me. His album Axis: Bold Is Love features a lot of the Hindu gods and goddesses on the cover… I wasn’t keen on putting a portrait of Hendricks on my body.  So I chose Parvati. At the time, I discovered a lot of myself … a strong side to express my appreciation for womanhood while giving a nod to Hendricks for helping me get through my hard times and inspiring me to seek that help. If “6 Was 9”, is a song on the Axis: Bold Is Love album. It has been described as an individualist anthem and it’s about the youth movement in the 60’s.  It was something I could really relate to.

Geisha—there is a band called CSS, which stands for Cansei de Ser Sexy which means “tired of being sexy.” During my first year of college, I found myself surrounded by the typical college girl—something that wasn’t me. I felt out of place and uncertain about myself and that’s when I discovered this band downtown at a bar. The band name and style of music really encompassed who I was. I have always been really drawn to Japanese art, and once I found out the lead singer was of Japanese descent, I thought it was the perfect opportunity to get the Japanese piece I wanted. Geisha was also a nickname friends of mine would call me because of my love for Japanese art forms.

Abstract Design—When I was two years old my parents got divorced and I spent a majority of the time with my mother. She assured me that there were different types of families, and we were our own little family. I’ve always thought that the song “Dear Momma” was such a contrast to the hard streets lyrics often portrayed, and I have always really appreciated that he sang a song for his mother thanking her for life. In the song he makes reference to her being a queen, and that is how I feel about my own mother. It was very sweet and touched my heart. I decided to get this tattoo in honor of her and our little family of two. It’s kind of an abstract crest for our family, and I put the crown in the middle to symbolize her presence in my life.

Tattoos are more than a way to display who you are and what you stand for. They are a way to pour your every feeling and thought into a piece of artwork that can only be interpreted by you. Others may see them but no one can explain exactly what they mean or what the story is behind them except for you. A simple picture is said to be worth a thousand words, one painted on paper or taken with a camera, but to have one displayed on your body not only shows overbearing emotion but an outstanding commitment to what you find dear and hold true to yourself. There is always something that needs to be said and expressed, always something that needs to be remembered and said. Never be afraid to remember and never be ashamed to express.