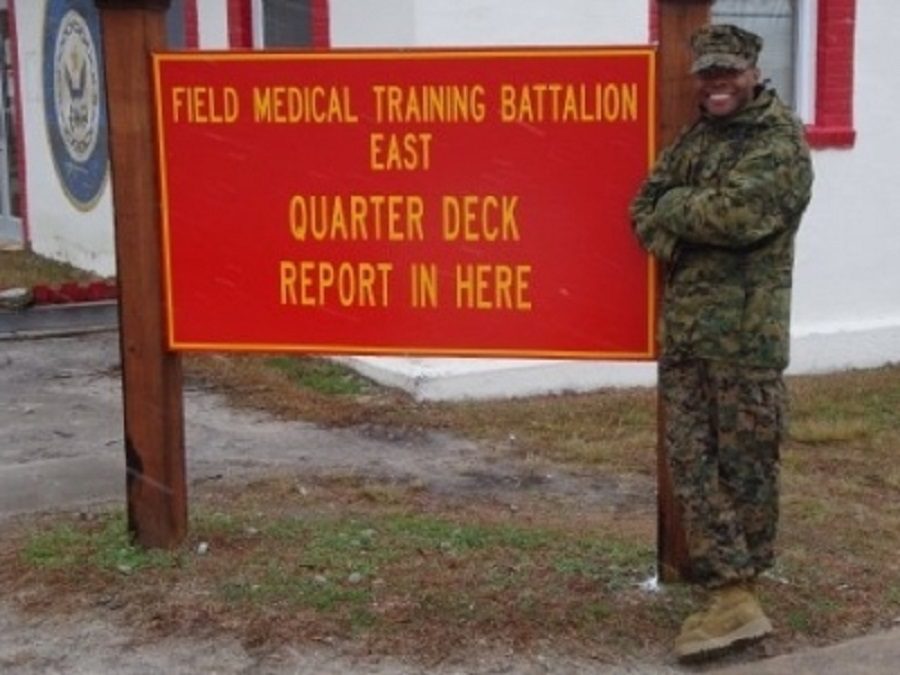 Life-affecting inspiration comes in many forms.” Displaying his characteristic upbeat attitude, United States Naval Petty Officer Third Class Darrell Fleming reflects on his life five years ago. In 2006, he couldn’t have predicted he’d now be where he is, doing what he’s doing, being who he is.

Darrell lived in Oveido and was a journalism student at Seminole Community College. “I wanted to write about what was going on in the world,” he says. He was the general manager of Steak ’n Shake, worked over 60 hours per week, made good money, and was generally satisfied, but felt something was missing. At the height of the wars and the start of the financial crisis in 2008, an employee was telling Darrell about his determination after graduation to enlist in the Navy. Darrell’s Marine Corps father exposed him to military life growing up, and he couldn’t understand why his co-worker would make that choice. He probed and taunted the decision. “People are either angry or afraid of what they don’t know,” Darrell reminisces on those conversations. Inspired by the younger employee’s passion and ambition, he began to consider a new perspective. One day when he wasn’t scheduled to work, Darrell went to his job as a customer and saw another manager tired, frustrated, and run-down. He saw himself from the outside and thought, “This can’t be it for me.”

After a period of solitary contemplation, he went into the local Navy Recruitment Office and enlisted. He becomes serious as he recalls the gravity of that decision, “I was worried about being judged. I didn’t discuss it with anyone because I didn’t want anyone putting negative thoughts in my head about what I was about to do.” After boot camp, Darrell completed field medical school, and within a year of joining the Navy he was with the Combat Logistics Regiment 27 in Helmand Province, Afghanistan, initiating the setup of the battalion aid station on forward operating base, Camp Dwyer. His managerial experience proved invaluable when he was placed in charge of running the station. “I was just doing what I always do: work hard,” he says. “I wasn’t expecting anyone to pay attention.”

For those efforts, he was awarded Sailor of the Year in 2009. “When I won, I was flabbergasted. You know when you realize something good that you never saw coming? Like when you move and your favorite pizza place ends up being on the corner? It was like that.”

The Navy has provided Darrell a life he’d never thought possible: “I thought I’d be on a boat, like the movies,” he says. “Ships and planes and weird sailor tattoos. That’s not what my life is at all.” After returning stateside and serving at various posts, he decided to re-enroll in college to take advantage of the educational assistance of the GI Bill, as well as plan for the next steps in his career and his life. The online flexibility from the University of Phoenix suits his situation, and he is currently a part-time student pursuing a Bachelor’s in healthcare administration, with a management concentration. His military experience has awakened a passion for medicine he’d never known before, giving him a new direction.

In summer 2011 Darrell heard about an available assignment with the White House Medical Staff. Although he acknowledged the potential difficulties with such an esteemed position, he assembled his application package and submitted it for consideration. When he received the call in September to schedule an interview, he was blown away. Knowing he had to bring his A-game, he says, “I told myself I couldn’t get excited until the day of the interview, or else I wouldn’t be able to sleep.”

The interview process was a grueling day-long experience including an intense questioning of his background, credit, and personal history, followed by an interview with an entire panel of medical experts. “It was terrifying. On one side of the table were twenty people – doctors, nurses, the entire White House clinical staff – and on the other side, one lonely chair in the middle of the room,” he recalls. Because of his experience interviewing others when he was a manager, his confidence shone through. “I gave them answers I didn’t even know I had in me. I was my professional and personal best. If I had wanted it to go that way, it wouldn’t have,” he says. The emotions were so overwhelming afterward that he teared-up when he called his mother to tell her about it.

Although the White House passed on Petty Officer Fleming – telling him that though they thought he was an admirable candidate and sailor they felt it was too early in his Navy career – he doesn’t regret the experience for a moment. He emanates acceptance rather than disappointment as he reflects, “There’s nothing else I could have done to have gotten it.” He has been encouraged to re-apply with the White House Medical Staff with the next available position.

Now at Camp Lejeune in Jacksonville, North Carolina, Darrell continues to work on a degree he’s strived for nearly eight years off-and-on, while he awaits his next assignment at Marine Corps Headquarters in Arlington, Virginia. He still works over 60 hours per week, makes good money, and is generally satisfied, but now he doesn’t feel there’s anything missing. “First-hand experience changes everything. The Navy has given me experiences I wouldn’t have had otherwise. Without it, I would never have seen Afghanistan or Germany, or been in the private halls of the West Wing.” He advises, “Keep an open mind when you’re thinking about your future. Your plans may not work out the way you envisioned, but it’s okay to make mistakes. I’ve learned you won’t get anywhere resting on your laurels.”

One thought on “Oh, the Places You’ll Go: Around the World and to the White House”