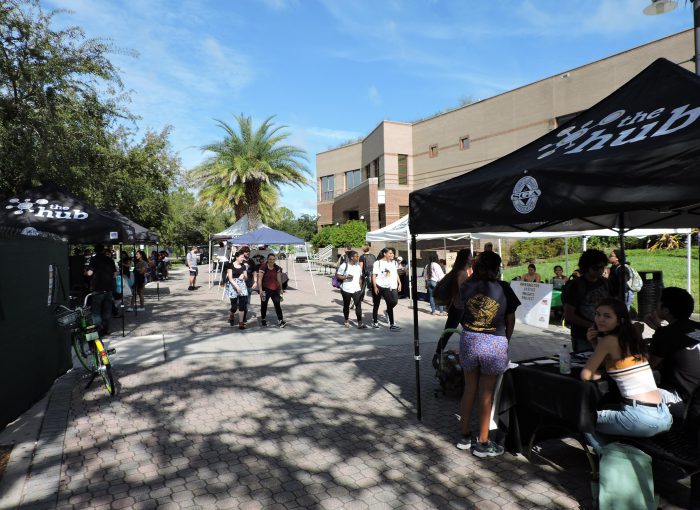 When I first arrived at UCF, two words that continuously rang in my ears were “get involved.” I came fresh out of dual-enrollment, where extracurriculars are a pretty big deal, and this was no different. Administrators, teachers, friends, my mom, her mom—their urgings echoed on and on.

Sure, I said. I’ll sign up now. But I soon faced a problem: where were all the clubs?

As a freshman, I was unsure of what was available for me to join. I certainly didn’t see much advertisement for on-campus clubs around campus. My top news outlet was the bulletin board in my dorm hallway, where I found out about the various movie/ paint/ concert “knights” and more that kept me busy during my first semester. I tried visiting the website’s “Clubs and Organizations” list, but it was unwieldy, loaded with fraternities, honor societies, and other prestige groups. It became increasingly easy to become overwhelmed. I cut the search short, still longing to join one of those quirky clubs you see at fictional TV universities.

It wasn’t until the spring that I found out, through a friend, about a club for writers; around the same time, another friend of mine caught wind that Glee auditions were taking place. Day after day I began seeing glimpses of the nearly 700 clubs that the website lists, but only by word of mouth.

So I started following the leads. I joined Writers Uknighted, which has gotten some coverage here in Imprint before. I attended Glee’s various showcases in support of my aforementioned friend, who was ultimately accepted. I joined Cubing Knights, UCF’s fledgling Rubik’s Cube club (“There’s a club for that?”) and learned to solve a cube from the president himself, sophomore Cristian Nieves, whose record time stands at 6.44 seconds. He plans to make the club official in the fall of 2018.

What I found was fun and fascinating—from wacky writing activities, to beautifully performed and choreographed song-and-dance numbers, to Rubik’s dodecahedrons (12 sides! Horrifying!). A year later, I’ve explored even more.

Take Art History Club, for instance. Once again, a friend invited me to this “cute little club” that discussed art history and occasionally took trips to local museums and the like. I don’t know anything about art history, so I went in expecting very little, but the club is formatted in such an accessible, humorous, friendly, and informal way that I felt immediately included. With weekly icebreaker questions like “Which dead artist would you make out with?”, presentations (by student members) on topics that span the many realms of art, commentary about how many of the masters were probably gay, and more, every meeting is an adventure. I even attended a trip to Cornell Fine Arts Museum in Winter Park, experiencing a facet of Central Florida that I didn’t know existed.

Founded in 2010 under the counsel of Dr. Ilenia Colon Mendoza, a professor of art history at UCF, the club sets out to “foster a greater involvement of UCF art and art history students in the Orlando and UCF art worlds.” Club secretary Jenny Glissman says it’s an “outlet for students to expand their knowledge of art at a fun, and accessible level,” citing a balance between “fun, informative, informal, but also academic and professional in certain scenarios.”

Art History not your style? Well, UCF offers something for everyone; how about video games? In the fall of 2016, students Lake Spangler and Michael Wong noticed groups of gamers playing in the campus breezeway and Tech Commons (you may have seen them, too).  Seeing a decent amount of interest, they decided to go ahead and start Smash Knights, a club dedicated to the Super Smash Bros. games that focuses on the competitive elements of the series. Their mission: “to introduce members to the different aspects of the eSports community in the world of Smash Bros by allowing them to compete, learn how to improve, run brackets, secure venues, run streams, commentate sets, and participate in events outside of UCF.”

Members have the opportunity to take part in Knights and Squires, a system that pairs an inexperienced player with a pro, based on compatibility, in order to facilitate improvement and establish relationships. The club hosts weekly tournaments on campus.  During spring break, they competed in Atlanta, GA, to great success, even snatching up a record. Through it all, community remains a pillar of the club; they organize carpools for each other and Wong expressed hope of eventually making participation in large, out-of-region events like Genesis or Evo accessible to players who may not be able to afford it otherwise.

Smash Knights has helped many incoming students find community, especially those who may have not found their niche yet.

According to  Wong, “Generally, everyone tends to be into similar things whether it be something with game design, engineering, programming, music… by playing and talking with other members, people find who they can connect with.”

And ultimately, many also stick around for the pure childhood nostalgia.

Another club I visited was ASL Knights, the American Sign Language club. A friend of mine, club member Rhiannon O’Neil, invited me after teaching me a few signs she’d picked up (some odd ones—tree, Mexico, death), and I gave it a shot. I was nervous heading in, since I was neither deaf nor fluent in ASL, but the anxiety quickly washed away when I realized that neither one was a requirement. Founded in the early 2000s by Professor Adam Ledo (now at Valencia), the club set out to “create a place for all students, of all ages… not only to make a place for people to interact and make friends, but to shed light on and raise awareness of Deaf Culture in our world today” (courtesy of Lydia Rhoa, Secretary). The club strives to unite the hearing and Deaf communities.

My first meeting was a ride—we played a game that involved learning the signs for various foods, then turning our backs and being handed a plastic version of that food, guessing what it was, and signing our guess. I was happy to go home knowing at least ten new signs. ASL Knights also hosts fun events like Dirty ASL (which is exactly what it sounds like, and happens to be their most popular event), as well as crash courses that teach basic survival signs, food, numbers, the alphabet, etc., all of which are open to the public. Further, they participate in Deaf Chats (events that include Seminole State, Valencia, and Daytona State) and organize trips to the Florida School for the Deaf and Blind in St. Augustine. Knowing this club exists makes me proud to sign a “K” at my shoulder and hip—the sign for Knight.

The variety here is staggering—there are clubs out there for pilots, ballroom/ swing/ belly dancers, animators, Disney fanatics, bridal consultants, and everything in between, each rich with heart and potential. The problem is finding them. We students have a responsibility to search, of course, but it has proven difficult to truly get all we can out of UCF’s myriad student organizations. Many beautiful clubs aren’t getting noticed, needing UCF to facilitate more effective advertisement.

Keep your ears open and be on the lookout. Explore what you’re interested in—there’s bound to be a club for that! And if there isn’t one, start it.