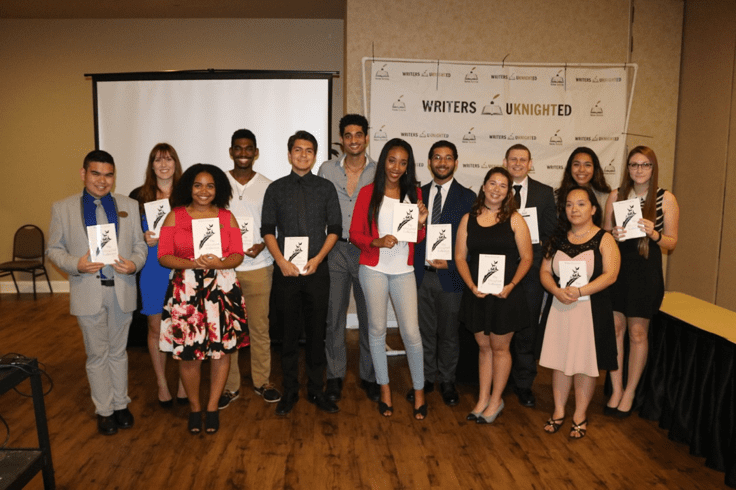 Are you anxious to hone in on your creative skills with fellow writers? Look no further than UCF’s official creative writing club, Writers Uknighted! This student-led organization is home to the many writers of the University of Central Florida, ranging from categories of all sorts—including fiction, non-fiction, poetry and script. I founded this organization in Spring 2016, and in the short time span that it has been alive, we have gained over 150 members. This is a space for the creative mind to explore and evolve in a positive and productive atmosphere.

Creative writing takes you to places that you’ve have never been to before. Through the art of expression, you find out details about yourself that you would have probably never even known. Once you sit back and immerse yourself in the world of words, there is no limit to the things you can create.

Here at Writers Uknighted, we offer a plethora of opportunities for UCF students.  In our weekly meetings, we participate in several writing activities that not only stimulate the mind, but also allow for each member to step out of their comfort zone and try their hand at a new type of writing. Every month, we host Open Mic Night, where students can come up in front of a live audience and present a piece of their choice. It is a very intimate setting with encouraging support from the audience members, and it is definitely a recurring event that our members—as well as other students around campus—look forward to. Furthermore, this club partakes in exciting adventures referred to as Inspiration Voyages, where we go on fieldtrips to places where we are able to pull inspiration from our surroundings and write in the company of each other.

In addition to these activities, Writers Uknighted allows members to exercise their creative capabilities—and put them on display for the public—through multiple avenues. During the spring semester, Writers Uknighted hosts a film festival consisting of four student-produced short films. Students from all over campus come together to collaborate on movie ideas, script writing, filming, and post-production. We put on our first festival this past year, and we were delighted to have had over 65 people working together on this project.

“The biggest thing that I received from this event was the experience. I got to experience amazing people. I got to experience the creation of a movie (writing, acting, filming and editing), and I also got to learn what makes a good story. As a writer, who desires to make films, I feel this experience made me more well rounded,” says Hines.

The fun does not stop there though! With the introduction of Writers Uknighted’s Anthology, titled The Uknighted Collection, several members were able to get their poems, short stories, and personal memoirs published in this book. It was a tear-jerking experience watching all of the proud authors holding their books during our Book Release event.

The life-long friendships and experiences that I’ve have had with Writers Uknighted will be something that I will remember for the rest of my life, and I cannot express how much this organization has impacted my college journey. I have learned skills that I will practice in my future career, and I have seized opportunities that I may not have had the chance to otherwise. Whether creative writing is a major passion of yours, or simply a hobby, there is a place for you at Writers Uknighted.