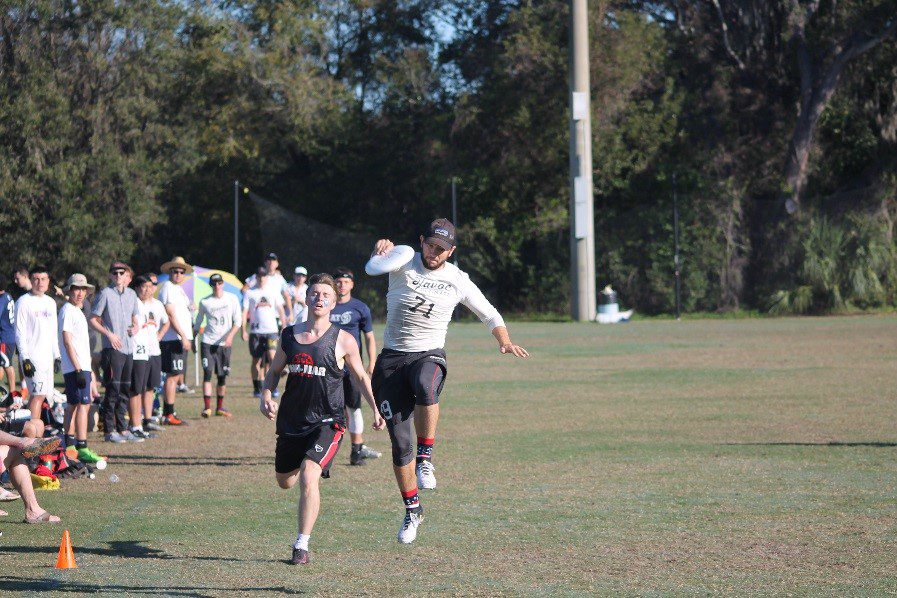 Fog encases the fields. A narrow trail of footprints in the dew lead to a small cluster of college students sitting on the damp ground. Their bags lie strewn around them as they lace up their cleats. A few stand up and start passing a Frisbee to each other. More follow, and soon, the sky is filled with white discs. A heavy silence blankets the field. No one laughs or smiles: everyone is too tense.

Finally, someone sets the speaker up. “Somebody once told me the world was gonna roll me. I ain’t the sharpest tool in the shed.” The song keeps playing, but it replaces the “All Star” chorus with different clips of Gordon Ramsey swearing. The tension on the field lifts as the players start smiling and laughing. They remember that they traveled to Tampa for an ultimate Frisbee tournament because they love the game.

After a lengthy stretching routine and a few warm up drills, Coach Ross calls the team together. “Alright, guys, forget about yesterday. Yesterday doesn’t matter. What matters is today. We just have two games today, so come out hard. We need these two wins to make it into the champ bracket for tomorrow. Florida Tech is garbage. You guys can destroy them.”

When he finishes speaking, McFerran, one of the captains, steps forward. “You guys heard the coach. Just play simple ultimate. We’ll keep it chilly and play our game. There’s no pressure guys. Now let’s go.” He holds out a Frisbee, and everyone clusters around him and touches the disc. “Cry!” He shouts.

“Havoc!” The team roars back at him.

We chant two more times before McFerran spikes the disc on the ground, and the players all high-five each other. The energy is palpable. “Alright, starting defense go on out there,” Coach Ross says. Seven players jog out onto the field.

And just like that, the second day of the Warm Up: A Florida Affair tournament begins for Havoc, UCF’s Ultimate Frisbee Club B Team. Last year, Havoc was a powerhouse team, and, for the first time ever, won its B Team Regionals. But that was last year. This year has been a growing season for a rebuilding team. Last year, with a large, veteran team, experienced captains, and several players who were good enough to play for an A Team, Havoc only lost three games the entire season. This year, Havoc lost three games on the first day of their first tournament.

Only half of the current team  played with Havoc last year. Many of those who did play last year were freshmen, so they did not get much play time. Last year, Havoc won games, because of pure talent and athleticism. This year, Havoc has to rely on grit and heart in order to win. Last year’s stars are gone, and Havoc does not have a single star or even two players who can  win games on their own. Each player must step up and learn new roles for the team.

But the team has no time to think about that as Florida Tech works the Frisbee three quarters of the way up the field before turning it over. Havoc’s defense reacts quickly and after five passes, Havoc has first blood. Coach Ross subs three new players in, and Anthony Saint John intercepts the Frisbee in Havoc’s end zone. The sideline erupts into cheers, and he passes to Tim Gleeson. Tim winds up and throws a deep pass which Clay Sheldon dives to catch for a score. The entire sideline rushes the field to cheer.

Havoc keeps rolling. Florida Tech does not score their first point until Havoc is already up by five. Havoc and Florida Tech trade points until halftime is called with Havoc up 7-3.  The team huddles up at their sideline.  Players wipe away sweat and gulp water and Gatorade as they wait for Coach Ross to speak.  Their eyes gleam with excitement.

“Okay, settle down, guys. Good job taking the half, but you can’t let up now. I want to destroy this team the second half. They scored three points on you this half. They shouldn’t score any next half. Respect these guys by destroying them.”

The team heeds his words.  Players out run, out jump, and out juke their defenders.  Finally, Tim throws to Clay again in the end zone, and he scores to end the game 13-4.

Coach Ross keeps his post game speech short. “Alright, that half looked a lot better. We play Embry in two hours. Get some water and food and sit in the shade. I liked the intensity out there.”

After the break, the team huddles up again. “Just remember what I told you before the Florida Tech game. Let’s go.” The team cheers, and the game begins.

Embry gives a much tougher game than Florida Tech. Embry has two players who tower over Havoc’s tallest players. They also have a few speedsters. Last year’s team would have won the game off of pure athleticism, but this year’s team does not play that way.

Although Embry scores two quick points to start the game, Havoc comes back with grit. They stop throwing risky passes and start grinding out long points. They tighten up their defense and start playing more physically, which throws Embry off. Embry has the athleticism but makes too many turnovers. Finally, the half ends with Havoc up 7-3.

Embry tries to claw back in the second half, but Havoc keeps fighting. The two teams trade points throughout the half as they play marathon points. Finally, the game ends, and Havoc emerges the victor.

Havoc ends pool play with a 3-3 record and is seeded 6th in the champion bracket. The top two seeds receive first round byes, so Havoc plays the 3rd seed UNF, on Sunday morning.

The team shows up and starts their warm up. Players show up late and the team jokes during the warm up. Even though UNF is the higher seed, they are not worried.

The game starts and after several changes of possession, UNF scores the first point. It is immediately apparent that UNF is on a completely different level than Florida Tech and Embry. UNF has the athleticism, but more importantly, they are a veteran team. Most of their players are upperclassmen who have played ultimate Frisbee in college for at least three years.

However, even though UNF is a far better team than Havoc expected, Havoc does not give up. Alex Warters dives to catch the Frisbee and then throws it deep to Austin Lachmann in the end zone to equalize the score. The teams trade points until the score is 4-4. The Havoc defense cannot stop the UNF offense and the Havoc offense grinds well enough to somehow keep scoring.

The ninth point begins, and Havoc’s offense turns the disc over on a bad pass. UNF quickly takes advantage of the mistake to score. Then Havoc receives the Frisbee, and the players run a play, but a UNF player dives to intercept the Frisbee. UNF scores again, and the mood suddenly changes on the field.

The Havoc sidelines stop cheering and watch in silence as their offense is scored on twice more. Finally, halftime is called with UNF up 8-4. Coach Ross gives a few words of advice before the game starts again. The players are fired up, but then UNF scores again. The Havoc players stop believing they can win the game. Sharp words fly in frustration as the game slips out of their grasp.

Havoc wins games with heart, and they lose a little bit more of their heart every time UNF scores. Havoc does not have the athleticism or experience to beat UNF, and they are too demoralized to pull off an upset.

Finally, the game ends 15-8. The Havoc players hang their heads and slump down on the sideline. Each player sits silently, lost in thought.

Coach Ross walks in front of them. “Well, we lost. We didn’t play well. We aren’t as good as last year. But who cares? The only thing that matters is where we place in the championship tournament at the end of the season. We have a lot to work on, but we have two months, and we will get better. We just need to work harder.” He looks each player in the eyes until they nod.

Havoc dominates Florida Atlantic in the consolation game to finish in 5th place. The players, especially those who played last year, are disappointed at their low seeding, but they leave Tampa with Coach Ross’ words ringing in their ears. They will work harder, and they will improve. As Tim said, “The UNF game in particular really showed us our flaws as a team, and we’ve been working at improving on them ever since. Our strategies have changed a lot, and that will give us a great chance at going far during Regionals.”