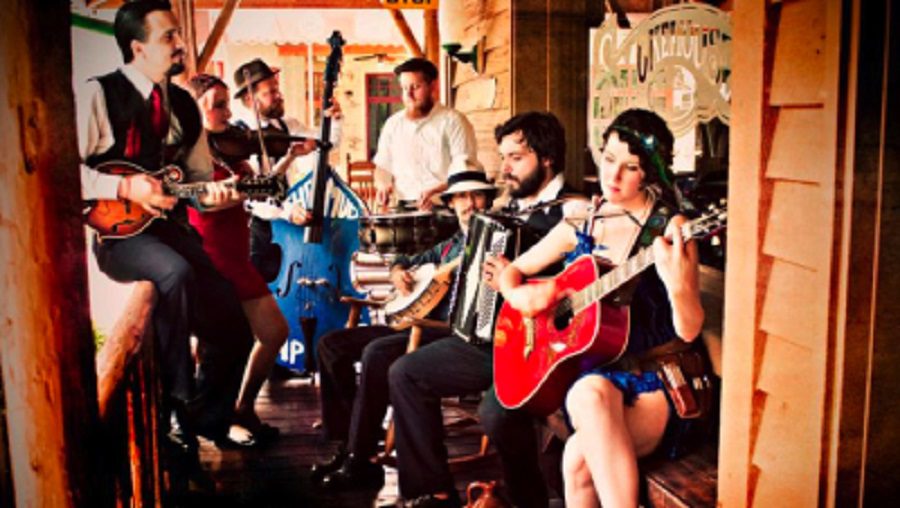 The Mud Flappers are a self-described “Floridana folk monster that makes you want to dance.” It’s safe to say that’s accurate. The sound they produce is entirely their own – a perfect convergence of eclectic talents and personalities. When the Mud Flappers were awarded “band of the week” in the Orlando Music News, September 2011, it was George who described how to say their name: “With melody, rhythm, and gusto! Not to mention in harmony if there’s more than one of ya.”

The name should be pronounced that way because they are a harmonization of the musicians themselves. If not for the truly amazing individuals, the collective could not exist as the happenin’ good time that it is.

Each person’s vivacity blossoms effortlessly in their live performances and recordings. You would think they’ve known each other all their lives; the chemistry of the bunch is so jovial and multi-faceted yet professional and focused. The banter among them at weekly practice is like soft sibling rivalry. Jabs, teases, and jokes intermingle with business-minded event and practice scheduling, concern for troubles, and friendly chit-chat that reveals deep camaraderie. When asked separately, each appreciates the unique, fun group dynamic and each is proud of all the group members: “We’ve grown tremendously as musicians” says Lauren.

Lauren Carder’s sultry, velvety vocals lead several of her own lyrical compositions. “I try to bring as much energy as possible to live shows,” she says, smiling and adjusting the intricate leather guitar-strap, of a design that she worked herself. (Two beautiful hand-painted ladies and a peacock, to match the peacock feather in her costume) She says, sometimes onstage she gets into a flapper character which is “a reflection” of herself, because she loves performing this “fun and rare and cool” musical style.  In addition to acoustic guitar, her kazoo, harmonica, and ankle-bell playing compliment her colorful beauty and sweet personality as the elements of her sprightliness.

“I am myself onstage,” says George Blair Moore Jr. Traces of his history playing with metal bands still show in his vocal style and when he rocks a mandolin with vaudevillian flair. He enjoys the Orlando music scene for “opportunities of having the pleasure to work with so many great people.” Behind the scenes, he also produces and constructs the upcoming album. His passion for it makes him shine as the “sonic architect” of their recordings. Each detail is perfectly balanced, each instrument highlighted, each musician’s stylistic potential fulfilled. He plays eleven instruments (“I’m always expanding myself as a musician”) and can discuss music ad nauseam.

Mikey Bulko “just want[s] to play drums. But if I could sing, it would be cool.” By day, he works selling drum-sets to customers, but by night he sets the background for the band’s jams. His degree in e-graphics is coming in handy for designing promotional material and merchandise, including the ingenious “mud-stache guy keychains” available at shows. He digs Orlando’s charismatic local musical vibe, which he feels is an improvement over his Michigan hometown. His summarized self-description: “Lunch. Because of sandwiches. It’s been a good week if there’s sandwiches for lunch every day.”

Accordion players are unicorns of the music world – no one knows if they exist until one is sighted. This one’s name is also Mike (Foreman), but he is a rare sight indeed. On a brief hiatus because he and his wife are expecting, the other Flappers wish them “A big congratulations from all of us, and all of you that like babies!” Apparently he also “works six days per week. Probably to prepare for how expensive babies are.”

Banjo-picking Marc Lingle wears a seven of diamonds in his hat because it is the only diamond distinguishable when flipped right-side-up from upside-down. There’s an element of country influence to his playing, and he synchronizes it with his ragtime piano influences. Although he has few chances to tote a piano to performances, listen for it on their recordings. “I love our modern interpretation and revitalization of old styles,” he says. In character onstage to some extent, he tries to “let out as much” of himself as possible. The corny wise-cracks are genuine to his offstage personality.

Sarah Elizabeth Patrick, the other lady lovely Mud Flapperette, is the “interior decorator” responsible for structuring the harmonies and melodies of most songs. “She also writes a mean hook,” George tells me. A classically-trained musician with a BS in psychology, she’s a triple-threat of beauty, brains, and talent, who plays violin and ukulele, sings with pristine operatic splendor, and contributes to lyrical composition. She’s radiant when she tells me how she loves the entirety of the band: “I love contributing to the soundscape. I love our expressive costumes. I love the collaboration of everyone building on ideas together.”

When Jake Williams gets up to thump that blue stand-up bass of his, there’s not much to do but tap your toe and go with his rhythm. His heavy rockabilly influence helped him develop a groovy style on an instrument he says it’s “easy to beat the crap out of but hard to finesse” that came to him by chance. He mixes reggae, punk, and folk styles, and the cigar in his mouth isn’t just a prop – he enjoys a good hand-rolled one as regularly as possible. A motorcycle-riding sportsfan who quotes Hunter S. Thompson, but says he “needs to read more,” George describes him as “the track the band’s train follows.”

The band credits their stylist Rachelle Caplaan and videographer Michael Poley for their contributions, but really, this is an example of the whole being more than the sum of its parts. Getting to know them, they’re terrific, and it was easy to go overtime talking before I was privileged to hear unreleased material that embodies their vivacious, entertaining spirit. Their album is in production and scheduled for release early next year, but until then you can see them live around town. At their live shows, try to refrain from steppin’ in time. I dare you.