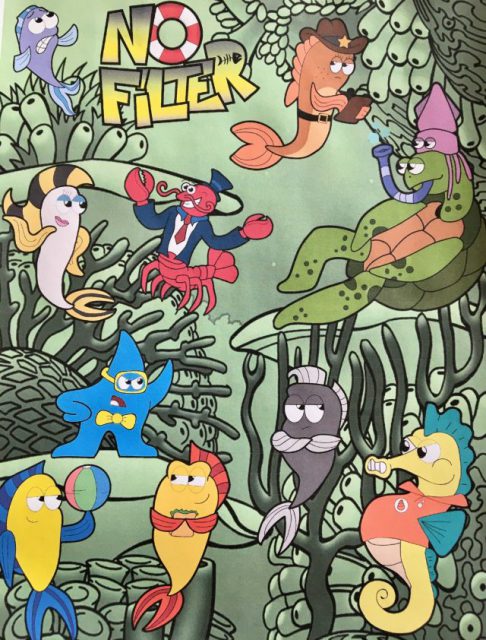 Adult cartoons are often not given the respect they deserve. Because audiences know that the characters are not real, animation writers can push the boundaries in discussing sex, violence, and other not so easily talked about issues.  There is an understood distance from reality to any grotesque topic, which has  probably caused audiences to not take these cartoons seriously. Yet, as these cartoons have evolved, so have their themes.

The Simpsons is a great example of how these shows have decided to expand towards politics and pop culture issues.  With the content focusing on relevant and timely issues, like gun laws and sexism, a more diverse audience watches. Rick and Morty and Bojack Horseman are shows that broadens contemporary themes even further by tackling existentialism and mental health.  They ask audiences to consider deep questions about our existence such as why we are here and whether we have a purpose.

Here at UCF, juniors Nick Bernardino and Craig Epps are creating No Filter, an adult cartoon that transcends that of which we’ve seen before. They will provide the rough sketches and voices as well as the art illustration for the show. Nick is a Social Science Education major while Craig is studying Digital Media. The inspiration from the show came from Nick’s love of theater and voice acting. With a love of Pixar and a knack for storytelling, the framework of this show began to form as early as the 6th grade when Nick realized that he could do an impression of Stitch from Lilo and Stitch. From there, he began to learn more voices which eventually pushed him to take drama and acting classes.  While Nick is deviating from his major, Craig has always had a passion for animation.  This cartoon gives him the opportunity to better hone his skills as a future artist for games, shows, movies, or theme parks.

No Filter is about a pet fish who gets flushed down into the open ocean, where it is dingy and dirty. Gimpy, the show’s fearful protagonist, gets picked up by a gang of delinquent reef fish who befriend him and teach him all about the real world. In an interview Nick states, “The show is incorporating moral and ethical dilemmas in the sense that they will take the stance that life is dirty and broken, but in that there is friendship and smiles.  There is also the message that you can try and be afraid of everything and live sheltered, but in the real world you can’t escape what’s out there; you just gotta learn and grow.” Ideally, the show is going to maintain a balance between the meaningful, quirky, and raunchy.

Of all the hardcore animals to exist, fish hardly seem menacing. When prompted, Nick shared that he chose fish because they don’t exhibit emotions as outwardly as other animals. “Nobody knows what they are thinking, and this is my interpretation.” The filth of the open ocean is intended as a metaphor of the filth faced in the real world which reflects corrupt politics, history, and work conditions.  A detailed history of the open ocean is built and explained throughout the series in order to support these ideas. There will also be characters displaying more individualistic themes such as heartache, fighting, flirting, and loss. Rather than relying on a family dynamic displayed in most adult cartoons, this fish will have to learn to assimilate into his new environment while simultaneously learning the harsh lessons that life offers. This deviation from family is important because the show must now rely on strong supporting characters. It is highly reminiscent of a reverse Finding Nemo, where instead of being shown the human world, Gimpy is shown the ocean.

Nick shares that, “All my life I’ve wanted to create something and use my vocal talents to make people laugh and think.”  This show provides not only entertainment to those who watch, but it also allows for conversation about what’s happening around us. Even deeper than that, it will provide inspiration for creators who don’t believe that they are in the right field of study.  Nick and Craig prove that despite your major, you can still showcase your talent. The show will be available to the public by the end of 2017.