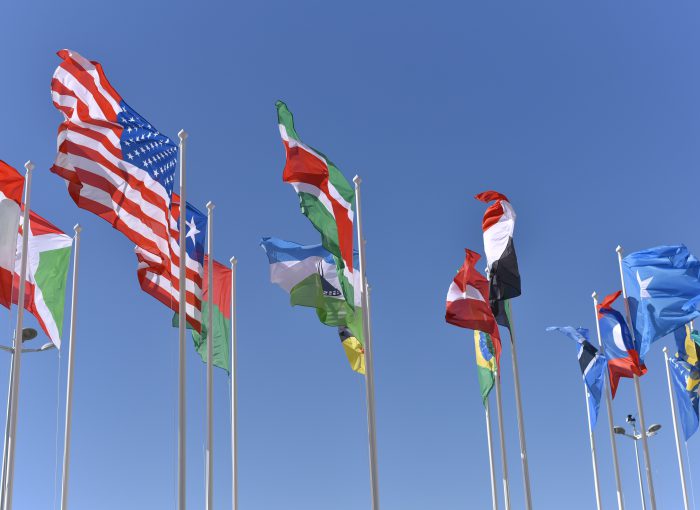 By Mallory Henderson and Brianna Lashway

Writing is hard. It’s one of the most difficult pursuits that happen in our day to day lives. However, writing poses a new set of challenges when you are not writing in your first language: it can feel kind of like being tossed in the ocean. With almost 72,000 students at UCF, each come from a variety of diverse and distinct backgrounds. As graduate tutors at the University Writing Center, we have had the privilege to work with Maria, Aram, and Akira–students at UCF from Brazil, Saudi Arabia, and Japan respectively. This also means that we have gotten insight into what being multilingual means for writing. Through interviews we held with each student, we hope to shed light on both the challenges and triumphs multilingual students face every day. While the challenges are nothing to ignore, these students face adversity with a willpower and they see victories that only being multilingual can bring — almost like having superpowers.

If I could spend hours interviewing Maria, I would. Maria is a master’s student at UCF that I have come to know over the course of a semester. Originally from Rio de Janeiro, Maria moved to Orlando eight years ago after receiving her undergraduate degree in Brazil. She is currently pursuing her second master’s degree (You are much stronger of a human than I am, Maria!) through UCF’s Hospitality program.

At the beginning of our interview, I asked Maria to explain one of the biggest challenges she faces with writing. Immediately, she responded “The main one is that when I want to express myself…I know that my content would have more quality if I would be writing in Portuguese instead of English.”

Half the time that Maria and I work together, we do not focus on writing. Maria is a brilliant writer. Instead, we negotiate words and thoughts. In our sessions, Maria will often think aloud: “Hmm. How can I say this in English?” or “What is the English word for this?” In one of our very first appointments, Maria explained to me that there are Portuguese words that do not exist in English. There are Portuguese expressions that cannot translate to English. Wow and I thought I had a hard time putting thoughts into words. Now, there are actually no words to match ideas. Not only is that tough but Maria explained that it also takes 3x as long to write for class. The energy she puts into writing a discussion post resembles the energy a native English speaker would put into writing an entire essay. Again, and I thought writing was tough.

While this hardly scrapes the complexity of the challenges we discussed, I was curious as to how Maria navigates these obstacles. “What about professors? Do you ever reach out to professors?” I asked. Maria’s answer was humbling. She explained that often, she doesn’t. Instead, she replied, “I can’t stand out just because I’m international. I cannot have different treatment because I am international. I applied for this school, I knew that I would face challenges, and I’m facing them. I am here to face them.”

Despite these challenges, we did end the conversation on a positive note. When I asked Maria what being multilingual meant to her, she began to critique herself. She said, “The judgements come first.” However, she ended with “But…I feel like I can conquer anything because I have faced all of the challenges that I have to be here.” She further explained that being multilingual has allowed her to be more empathetic and understanding of the people around her. In other words, being multilingual does not just mean speaking different languages. It means being able to understand different cultures. It means seeing life through not a single lens, but multiple. If that doesn’t sound like a superpower, I don’t know what does.

You may have been thrown in the ocean, Maria. However, all I have seen is someone who has sailed the seas. What I have witnessed is someone that can conquer anything.

“I think [being multilingual] is a superpower.”

As I was interviewing Aram, a senior Graphic Design and Emerging Visual Arts/Emerging Media Management double major, I asked her a seemingly simple but somewhat challenging question: What does being multilingual mean to you? To my surprise and delight, she described her ability of knowing Arabic, English, and some intermediate Spanish as a superpower, on par with being able to fly or read minds or turn invisible.

Let’s stop and think about this for a moment. Flying. Mind reading. Invisibility. All pretty insane, awesome, and not so realistic stuff. And then, on the flip side, you have languages. Cultures. Different perspectives. The beauty of multilingualism is that it shares the insane and awesome aspect of typical superpowers but stands apart as something real and concrete. Aram and other multilingual students at UCF are doing more than just speaking in a different language, they are opening new avenues in communication.

A challenge that Aram expressed involved the language and cultural barrier she faced with her professors. A commonality that Aram noted as she described her experience with professors happened to be empathy and understanding. Professors who took the time to leave comprehensive and detailed feedback and answer any pertinent questions about Aram’s writing left an indelible mark on her attitude toward empathy. On the other hand, she felt very frustrated when professors sort of brushed off her concerns with a mindset Aram described as, “Well, you’re in college, you have to work for it.” Like Maria, Aram made it clear to me that she was never looking for special treatment; instead, she believed having that a safe space to talk to professors who were willing to take the time to answer questions and concerns has been incredibly important to her success as a student.

Okay, so we’ve established that superpowers are pretty awesome. But maybe these powers are too good to be true. After all, Superman had his kryptonite. According to Aram and another student, Akira, that I had the privilege of working with at the Writing Center and interviewing, being multilingual presents its fair share of challenges. From a small city outside of Osaka, Japan, Akira explained to me that organization is one thing he struggles with in his writing. In Japan, typically the conclusion will come at the end of everything but in America, he says that this is “not always true.” Akira is constantly trying to reconfigure his writing to fit the standards of English that is acceptable at UCF and other universities in the United States.

Through Maria, Aram, and Akira’s eyes, we’ve learned that language and cultural barriers are the kryptonite of a multilingual student. The difference between Superman and multilingualism’s kryptonite, however, are important. Superman will never be able to learn how to beat kryptonite. A person who is multilingual, on the other hand, has a secret weapon: ability. Written discussions, which is what Aram and I worked on in the majority of our consultations, provide her with the best practice to improve her written skills in English. Similarly, Akira believes writing and utilizing the University Writing Center are his best forms of practice. In this instance, these students have the ability to use multilingualism to their advantage while also using that same ability (one example is practice) to face the adversity it brings.

Impressively, Maria, Aram, and Akira face these challenges and adversity head on. They each acknowledge the difficulty of coming to a new country and speaking multiple languages with English as their second language. Even so, they think of their multilingual status as something that opens doors for them. As Mallory stated above, Maria’s multilingualism gives her multiple lenses with which to look through; she is more empathetic and compassionate of the people around her. Akira believes that it gives him more resources and a way to communicate more effectively and broadly. In the same sense, Aram believes that it creates unity between herself and others while also giving her this sense of satisfaction, ultimately saying: “It brings you to another world.”

I, for one, will keep on the lookout for this special superpower that many of our students at UCF share. Keep on breaking those barriers and opening even more doors. I will loudly and enthusiastically be rooting on the sideline, learning so much about myself and others along the way.

The impact that working with these students have had on us can be boiled down to a singular word: humbling. Coming to a new country with a different language, way of writing, and cultural considerations is no small feat. It is absolutely humbling to think that these students, faced with adversity because of their multilingualism, procure a mindset that celebrates their diversity. Each of them carry their individual superpowers; that is, the ability to navigate rough seas and set sail to waters untouched by most.