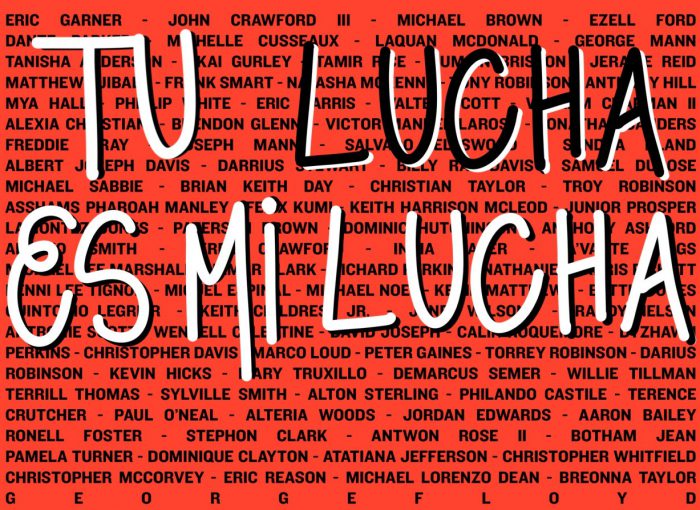 The COVID-19 outbreak has pushed everyone, both near and far, out of their comfort zones. It has placed a spotlight on the pre-existing conditions of inequality, discrimination, prejudice, and systemic racism throughout our systems and communities. The murder of George Floyd in Minneapolis, Minnesota, while in police custody, ignited a match for white Americans and gave them a preview of police brutality in America. However, for Black and Brown communities, this is their reality. A study published by the National Academy of Sciences reported that about 1 in every 1,000 Black men can expect to be killed by police. Black women and men are more likely to be killed by police than white women and men. Latino men are also more likely to be killed by police than white men. In retrospect, I have asked myself a couple questions: what do these statistics mean, and what are they the result of?

Over the last two months, I’ve come to grips with the reality that as a white-passing Cuban-American woman, I benefit from a system that has perpetuated a criminalized image of Black men and women and has carried it into every aspect of our daily American life. It is seen within our prisons, schools, healthcare systems, police policies, and governments but, most importantly, in our very own households, families, and communities.

As a student at UCF, I’m proud to attend a university that is recognized as a Hispanic-serving institution, and one that prides itself on its diverse student population. It is known that Hispanics share many of the same experiences with Black Americans when it comes to exclusion, discrimination, and challenges to opportunity. Despite this, anti-blackness sentiments and colorism are still prominent issues that Hispanics living in the United States must confront to work as a community with a unified voice.

According to Pew Research Center, reports show that 64% of Hispanics with darker skin tones have reported incidents of discrimination, a much larger percentage than for those with lighter skin. Although this data is telling, just listening to your Abuelita or Tia remind you to adelantar la raza (advance the race) is enough evidence. What many Hispanics seem to disregard is the influence of the African spirit that lives within our music, language, food, dances, rhythm, art, and culture. If we take a look at history, over 10.5 million Africans were taken to parts of Latin America and the Caribbean during the Middle Passage. Afro-Latinos make up a significant part of the population in Latin countries but play an even bigger role in shaping the Hispanic identity. This eventually led to the creation of a color identification system that separates Hispanics by calling them blanco (white), negro (black), Jabao (bi-racial), moreno (light-skinned), triguena (dark-haired), mulatto (bi-racial), etc. The classification is driven by the darkness of your complexion. Over time, historical prejudices against being black prevailed, and having a lighter skin tone would eventually make your life easier once emigrating to the United States.

I had the pleasure of speaking with Liliana Ramos, a sophomore at UCF who serves as a justice for the Student Government. She shared with me her perspective on privilege since starting at UCF: “Since I grew up in Miami, I never felt like I stood out or that I should be labeled as a minority; even living in the city of Orlando, as a white-passing Latina, I’m often perceived as interesting, exotic, and trendy. That isn’t the case for many Latinos that appear darker and are seen as less-educated or immediately labeled as illegal immigrants.”

Ramos mentions that she believes it is our job to educate our parents and challenge anti-black teachings and habits. Racism is a learned behavior caused by a single ripple that transcends into those with whom we associate ourselves and the stereotypes we believe and, ultimately, influences our perception of injustice.

When asking Ramos about her ideas on improving the student body at UCF, she says, “As a member of Student Government at UCF, I know it has the power to amplify the voices of minority students and implement long-lasting change within our university. Representatives, Senators, Justices, Election Commissioners, and all members should strive to foster greater relations with RSO’s, mentoring programs, and all types of organizations to expand minority representation within all branches of the Student Government. UCF symbolizes opportunity, and we should offer every student a chance to represent their community and voice their concerns.”

We also spoke about how Hispanic and Black student-run organizations on campus should be encouraged to host forums and events alongside each other that give students a platform to share their stories and experiences with racial discrimination within their communities. Promoting unity and discourse among all minority groups on campus can also improve the relationship young adults have with voting in local, state, and primary elections. Reports have shown that in 2018, Hispanics, Blacks, and Asians made up 25% of voters, an increase since 2014 (21.7%). However, white Americans continue to make up a majority of voters (72%). These numbers are significant because they remind us that we have the power to elect officials who are in favor of policy changes to combat structural racism in our systems and prioritize criminal justice reform.

I was also able to discuss with Ramos how UCF can further implement understanding the dimensions of diversity within our university and in the real world.

“One way to show our future Knights how much we value the rights, history, and cultural experiences of our minority students would be to require a Diversity and Inclusion course/seminar for all incoming Freshmen and Transfer applicants to take at the beginning of their first semester. This course would teach students how they should appreciate, understand, and function with people who belong to other cultures by taking a look at the uneven distribution of power within our political, social, and economic systems. A course like this should include the teachings of sociology professors, political scientists, psychologists, and public health representatives. Students would have exposure to theories around race, gender, class, ethnicity, and sexual orientation. We should also stress the history of division by race within the United States and the emphasis Americans place on labeling minority groups. For instance, in an attempt to unify the image of Hispanics, white Americans often ignore the diverse groups within the community and enforce parameters around the image of being Hispanic, Latino, or Latina. This can also be applied to members of the Black community, Native Americans, Puerto Ricans, Cubans, Asian-Americans — the list goes on. These limits around the identity of minority groups in America reduce our need or desire to learn about their history or the issues that plague their communities. It continues to make us ignorant.”

Many of us may ask ourselves, how do we keep the momentum going? How do we avoid turning this movement against racial injustice into a static moment in our history? What immediately comes to mind when thinking of an answer is a quote by James Baldwin, an American novelist, essayist, and activist:

His words remind us that accountability is essential to progress, and that it can be achieved if we continue to educate ourselves, listen to one another, and use our voices. I believe that through our strength in numbers, Hispanic students at UCF can work towards amplifying Black voices, supporting grassroots campaigns, and understanding the system many of us benefit from, regardless of our shared experiences. Although segregation legally ended in 1964 after the Civil Rights Act, many of us still lead racially segregated lives based on our friend groups, the organizations of which we are a part, and the cultures to which we expose ourselves. As individuals, we have the moral and social responsibility to remain open-minded, curious, and understanding, but as Knights, we all must uphold those values to the greatest extent.