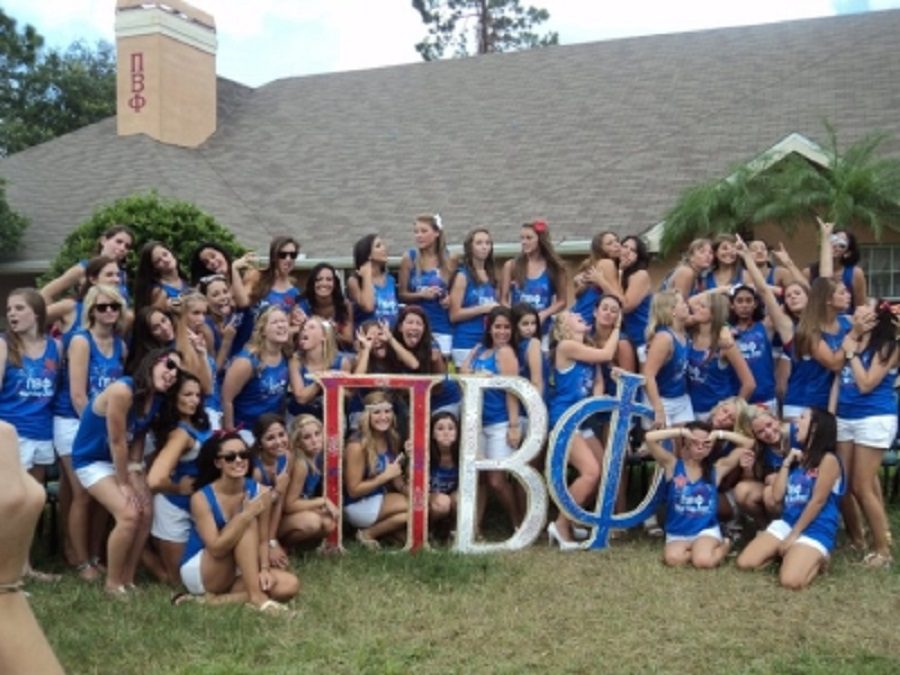 When I first came to the University of Central Florida, I never thought twice about joining a Greek organization. I was from a small town in Connecticut where all I had seen or heard of sororities was from the movie “Legally Blonde.”  The bright pink, overly excited, rich blonde Barbie Doll was something I never wanted to be.

During my first semester at UCF, I lived in out-of-state dorms to try to meet others who might feel a little lost having no family in the area. A few girls on my floor rushed a sorority that fall and tried to convince me to too, but I laughed behind their backs at what I thought to be a ridiculous venture.

Months went on and before I knew it, it was the end of my sophomore year and I still felt completely alone. Of course, I had a handful of close friends and was dating a nice boy I met freshman year. But I wasn’t happy. For the first two years of my college career something was missing. I just couldn’t put my finger on it…

As summer began, I met a sweet girl from Alabama. Her name was Amber and she was dating a friend of mine. We hit it off right away. She was down to earth, witty, selfless, smart and absolutely hilarious. After a few weeks of knowing her, out of the blue she asked me if I ever thought about rushing a sorority. I was shocked. How was this chill brunette in a sorority? It went against everything I had ever thought Greek life was. She knew how I felt about UCF and that I had even applied to transfer home to UCONN.

Amber was from out-of-state as well, and she understood how hard it was to not have that feeling of home at college. She told me her remedy was joining a sorority. It kept her busy, she met new people everyday, and she had a family of 170 sisters right here at UCF. This time I didn’t laugh.

Those Greek myths and stereotypes I had in my head for so long were all crushed when I met Amber. I couldn’t believe it, but I was considering rushing the upcoming fall as a junior. Before I knew it, she had signed me up for fall recruitment, promising me I wouldn’t regret it, not even for a second.

So, after a week of sweating in the Florida sun, visiting every sorority house and finally finding where I felt the happiest, I was welcomed home to Pi Beta Phi by none other than my best friend Amber.

I truly believed those Greek myths that once ruled my image of what sororities and fraternities were all about. That it was all drinking, toga parties, mean girls, being pretty, having money and being absolutely wild. But these myths are simply that, myths:

Daddy’s Money: Many people think that every sorority or fraternity member is rich and thrive off of their parent’s money. Well, just as many others at a college, some are well off and others not so much. Many organizations have payment plans and I personally know many girls, including myself, who work hard to pay to dues.

They Pay for Friends: We pay to support our organization, not for friends. Without funds, like any club, board or organization, it cannot operate. Most Greek organizations have houses, and with houses come a mortgage, upkeep, and rent. Sisterhood or brotherhood retreats cost money for renting out activities or buses. These organizations are national, and those who work for a fraternity or sorority depend on chapter funds to support them. Even philanthropic events cost money to host, in order to raise thousands of dollars for charity. Dues are necessary to keep the chapters running day to day, not to buy friends.

“Philanthropies” are a Joke: This is no laughing matter. Every chapter has philanthropic events to raise money for their respective charities. Pi Beta Phi is an avid support of First Book that promotes literacy. Other organizations raise thousands of dollars every year for charities like the Ronald McDonald House, Girl Scouts of America and even Autism Speaks. As a united entity during Greek Week, the Greek community raised $118,972.27 for the Children’s Miracle Network. With endless giving and support, the Greek community cares deeply for their philanthropies and sees the amazing change that they can achieve.

Greeks are Bad for UCF: People truly think that the Greek community does more bad than good. At the University of Central Florida, the population of Greeks is a mere 3,000 students out of the 58,600 that attend. Immediately their small numbers makes Greeks a minority at the school, but that does not stop them from being a crucial backbone to the University.  They are involved in every part of university life. They are a large majority in student government, including the recently elected President and Vice President of SGA who are both Greek. From organizations such as Eco-UCF, CAB, President’s Leadership Council and anything you can think of, Greeks are everywhere. Through Greek life they are able to be introduced to many opportunities and are motivated to join outside organizations to better the community and themselves.

They are Cliques: Then what is rush for? Every year hundreds of interested students go through recruitment and are welcomed into a chapter with open arms. Every year Greek life expands and members are added. This past fall another sorority, Delta Zeta, was welcomed to UCF and more will be adding soon. Greek life is an ever-expanding community that wants nothing more but to add more members, and by no means excludes.

They Haze: I was scared of being hazed. I honestly thought that hazing was an innate part of Greek life. But I couldn’t have been more wrong. As a new member, I was utterly spoiled. I was showered with presents, smiles, and hugs daily. No older sisters were intimating. They were kind, welcoming and helpful. Anti-hazing week is promoted every year will pins that say things like, “spoil not spank.” UCF and the Greek council prevent hazing and no chapter would tolerate it. New members should feel safe and at home in their chapter, not afraid. Besides, I wouldn’t be in an organization that treated me badly; I’m too much of a wimp!

Sisterhood/Brotherhood is Fake: Ah, my most hated myth of all. What binds all Greeks together is the sense of family that thrives from within. The very core of any sorority or fraternity is this idea that they are all sisters or brothers. They are there for you through the worst of times and the best. They guide you through the most crucial part of your life and cultivate the best in you. This is what I was missing those two first years. I was away from home, and felt alone. But in Pi Beta Phi, I’ve never felt that way. I have 170 sisters who love me and care for me and stand up for each other no matter what. This is my favorite part of Greek life.

So yeah, there are a lot of myths, even this might not dispel all of them but they are the ones that I believed to be true. I know what it is like to look in on Greek life and chuckle at their obscurity. But when it is viewed with a closed mind, you might actually be letting go of that one thing that could be missing from your college career.

With all myths aside, high morals, positive values, and love are the truths that Greek life boils down to. I wish I had known this from day one at UCF, because finding my way to Pi Beta Phi has made me feel completely and utterly at home. I encourage everyone looking to fill that empty part of their life at UCF to rush, because as Amber put it, you’ll never regret it if you do.

To find out more about Greek life at UCF, visit: http://fsl.sdes.ucf.edu