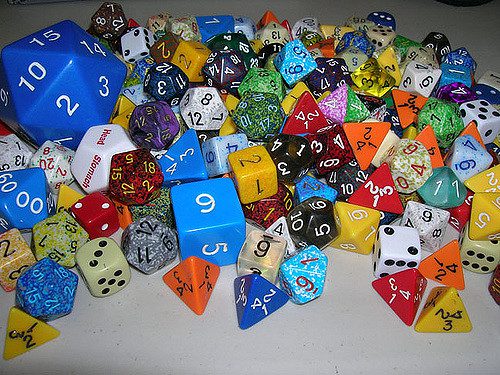 For the longest time, Dungeons and Dragons (D&D), was considered the lowest depths of “nerddom,” played exclusively in a parent’s basement by those who would burn under the light of day. While this is likely true for some, it puts a label on others, being misunderstood as a subset of people without much of a life.

If you’ve never played, D&D is a game requiring you, some friends, a couple dice, and a healthy imagination—everything else is secondary. While some Dungeon

Masters (or DMs) may play with an army of intricate models on detailed landscapes, consulting a dozen books and a pile of character sheets behind screens depicting epic battles, this isn’t necessary. Nor is conducting a campaign that will last years and go from down-on-their-luck adventurers meeting in a tavern to world-saving demigods, though you certainly can. D&D is whatever you want it to be, played however you want, with whoever you want, and on a college student’s budget (i.e. a couple bucks and a free weekend).

I started playing at the tail-end of 2016, after a suggestion to join my friend’s campaign. Since then, I have been running my own campaign for just over a year. The campaign I run is mostly with my cousins and their friends from UCF. I’ve never found an activity that is so inclusive. You don’t need to worry about not being good enough or the rules being too complicated—we’ve had new players make their characters on the spot, or make a new one mid-session. Players have jumped in and out of the campaign depending on schedules without slowing the group’s overall pace.

Plus, it’s as much work as you choose to put into it. My ongoing session started with one book for ideas, a shared bag of dice, and a whole lot of improv. It’s been broken up by one-shots for play at different levels and settings, and every now and then a player will run their own one-shot to see how they like being a DM. Just like all campagins, we have the ability to either extend our game for years to come or end it next session if we wanted. There’s no obligation to do more than you want, and the only limit on participation is showing up.

On top of all that, I’m a Writing and Rhetoric major who uses my campaigning to test my writing. I world-build, create characters, and run plot lines to see what works and what doesn’t. If I have a fun idea for an event or character, I can throw them in. D&D is a fantastic way to build your storytelling skills, increase your artistic abilities by drawing characters, or maybe even composing your own music to fit

an encounter. It’s a way to test your talents and see people react in real time.

If it wasn’t obvious so far, D&D is perfect for college students looking for something to do with a couple of friends and some open time in their schedule. In the last three semesters, I haven’t had a class without someone actively involved in a campaign. I have a friend who’s currently part of an Ace-exclusive campaign, as a meet-and-greet in the community. There are few better ways to get to know someone than by seeing if they roll up a lawful good paladin or a chaotic evil warlock.

If you’re looking for a place to start, you can look at the clubs around campus. Check in with D20 Knights, who have over 700 members on Facebook, or check with local groups like the D&D Adventurers League Player. If you want to look at nearby events, a quick Google search will find a number of local stores like: Campus Cards & Games in the University Commons or Cool Stuff Games just down Alafaya Trail.

Long campaign short, if you’re looking for something to do with your time, looking for friends, or if you just want to expand your horizon: D&D is something worth trying. There’s a chance you might discover things about yourself you didn’t know, like which friends have your back and which will backstab you for the free critical. If you find it to your liking, the next thing you know you’ll be years in with a cherished character, ready to face down that demon lord with your +5 Greatsword. You’ll beat that demon lord and your DM will hate you.

So go ahead. Roll those dice.