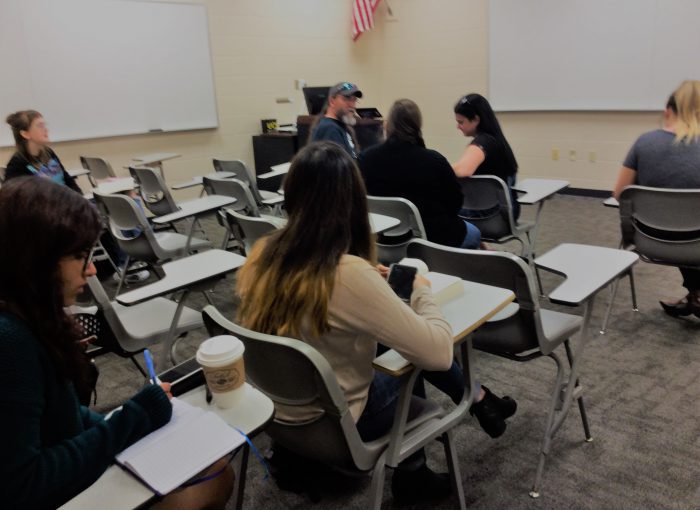 The first day of the start of a new semester is significant because you’re evaluating how accurately the ratemyprofessors.com reviews are, scribbling tons of assignments onto your calendar, and picking your unofficial (but secretly official) seat in the classroom. If you haven’t chosen a good one within the first week of class, you’ll be exiled to the awkward seats next to the corner of the wall that make it impossible to not be the last person out of the room. That, or you’re stuck with the broken desk in the back that was supposed to be removed, because it has a rusty nail poking through the seat. Of course, the most optimal seat will always depend on the layout of the room, the professor, and/or what kind of student you are—but I’ve created a guide that will help you to make the right decision when you’re in a pinch on that first day and want something that’s sure to facilitate some darn good learning.

Most of you are probably thinking, “Obviously I would just sit in the front of the class if I want to succeed,” but that’s usually not the most effective choice. Professors understand that they’re speaking to a room full of people, so they aren’t likely to linger by their podium and quietly lecture.  Professors know that extending their voice means that they’ll have to move away from the whiteboard (in between formulas, of course). Many professors will settle themselves right in front of the first row, which means that sitting there can be a strain on your neck if you’re a fan of eye-contact. I’ve had professors that go as far as pushing themselves against someone’s desk in the front row, because they’re so adamant about projecting. I’ve also dealt with professors who spray the front row like they are trying to grow alfalfa.

For these reasons, the second row is the way to go. Not only does it minimize stiff necks and getting sprayed, but it’s close enough for professors to be able to see and recognize your face and—if you want to go the extra mile and be a part of class discussions—you don’t have to shout or repeat yourself for the professor and everyone else to hear you. This is also a plus for those who like to participate, because anyone beyond the first three rows might be holding their hand up for a while before getting called on.

Another unwritten perk about the first few rows is that it’s where the more studious herd, so the second row will come in handy if you have classes with group projects.

The other great location to sit is the dead center of the classroom, but I’ve found that this only limits your vision. Sitting about two or three seats from the middle is ideal because then you’ve got an angle to see the board with, rather than looking directly over someone’s head. You can get away with a center-seat if you’re in an auditorium style class with leveled seating, but a little to the left or right never hurt anyone. If you can, try to see what side of the room the professor tends to gravitate towards (especially when writing) so that you can pick which side is best to place yourself.

Overall, if you end up running late to class and can’t quite catch the “perfect” seat, don’t sweat it. You’ve still got a little bit of time to work your magic, so show up early next time and claim one that works best for you. There will never be one seat that’s fairest of them all, so just try to stay in the golden zone; two to three rows back and two to three rows off center.