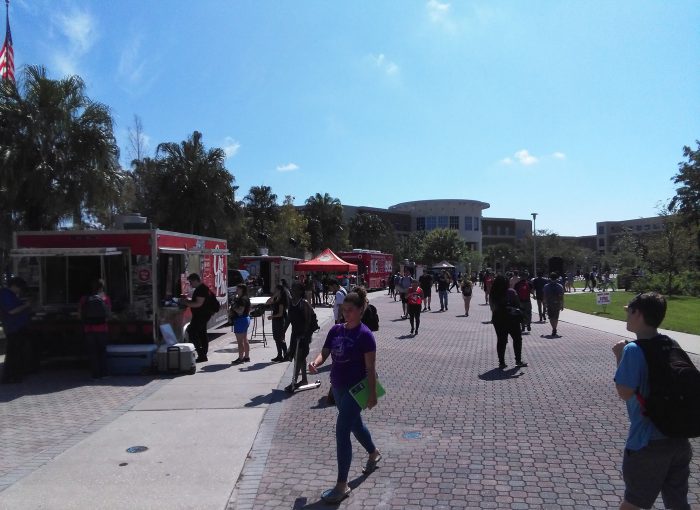 I used to describe myself as more of an observer than a contributor. Only in certain situations, where I knew the names of everyone around me, or had rehearsed my thoughts over and over in my head, did I allow my voice to ring clear and my opinions to be known. I attended a small private high school in South Florida. Not only was it my high school, but my middle and elementary school as well. With a graduating class of a mere 27 students (myself included) and a small faculty (all of whom knew your name), it was easy to determine that this place was one that I could be myself. My grandma even worked in the front office. No surprises, giant crowded hallways, or strangers. I thrived, and as I set my eyes toward higher education, I couldn’t imagine wanting to change anything about the environment I grew up personally and academically in.

Today, I proudly attend a university that is comprised of roughly 69,995 strangers, and it was without a doubt the best decision of my life. Strangers, though, is not the appropriate terminology. While technically true, it doesn’t capture the essence of what it means to be a Knight and be part of a community that genuinely cares for and looks out for one another. Of course, I had such a community at my high school, though I was ignorant to the fact such an elusive thing could exist elsewhere, let alone at a place 280 times the size.

My journey from a tiny private school to a giant public university was not exactly linear. While I’d always planned to apply to UCF, I was unsure of my feelings past the initial application process. In my application essay I wrote glowingly about how I would be excited to share my voice within a community as diverse and innovative as UCF. It ended up being a self-fulfilling prophecy. At the time I saw it as something that was nice in theory and not necessarily possible in practice. From 27 to 69,000? It had taken me years to be comfortable around my 26 fellow classmates, and I convinced myself it would be impossible to obtain anything close to comfort in such a large environment.

UCF was the first university I was accepted to, back in early September, but it was not until February that I took that leap of faith to be a Knight. Originally, I had convinced myself the only way to be comfortable, let alone to stand out, would be to go to a small, ‘safe’ university, perhaps with another class of 27.  I toured such a school and even completed an Early Decision application there. It would have been easy to keep myself in the small box I had become so comfortable with. Yet the pull of UCF continued, and by the time I had toured campus for the fourth time, I was finally ready to acknowledge, and even embrace, the idea that everything about UCF was exactly what I wanted. The community atmosphere, the distinguished academics, and the copious opportunities for involvement were all there, in the place I least expected it.

My personal transformation was not instantaneous, and it did not come without periods of self-doubt. From the moment I entered my first lecture hall filled to the brim with hundreds of students, I questioned whether or not this was the right choice. I’d be lucky if I got to know the row I sat with, let alone the entire auditorium. As the weeks went on, I realized I was learning just as much, if not more, and was exposed to the opinions of many others. Now, my fear seemed foolish. In a way though, my need for reassurance as I charted my path for college showed just how welcoming my fellow Knights truly are. I put myself out there and was welcomed with open arms. From students I passed who gladly pointed me in the right direction, to advisors going above and beyond to help me plan, to professors taking a chance on me and giving opportunities.  I wasn’t just changed, but uplifted to be the best version of myself I had not previously known existed.

College in and of itself will not always be smooth sailing, no matter how wonderful the university. The measure of the university is how they respond. My growth and development as a person thanks to UCF also allowed me to learn other life-altering things about me. In November of 2018, at a psychiatry appointment at the UCF Health Center, I was diagnosed with Bipolar Disorder. It became clear that change would take place sooner than anticipated, and once again the community here rose up to help me overcome.

In fall 2018 it became clear I needed time to focus on my diagnosis and would be unable to finish the semester. I felt the same fear and uncertainty I did when I first stepped onto UCF’s campus, but now it was for the opposite reason. Would I be able to return to the school that I had grown to love so much? Once again, the UCF community rose to the occasion, and I was able to take an Incomplete, finishing my courses after the semester ended. I was only able to request this thanks to the confidence my previous time at UCF had given me, where I’d never been turned down when asking for help. Two semesters later, I’m continuing to better myself as a person on a day-to-day basis thanks to Knight Nation. This is just one of the many examples of the UCF Community rising up to help me, personally. As a community, supporting and leaning on one another is a daily occurrence.

Often I contemplate what I would tell someone still searching for their perfect collegiate fit, who are perhaps a bit apprehensive when hearing just how large our university is. Genuinely, the only real way to understand is through experience, but if my words could hold any weight, I would say to them that they will not be lost in a sea of people. Rather, they will be uplifted by each and every one of their fellow students, professors, staff members, and friends, just as I was. Be it a simple request for extra help to a professor, asking a fellow student where to go, or relying on your university during major life changes, UCF will be there for you. Our large size can be intimidating at first, but it is undoubtedly an advantage. At UCF, you will both fit in with likeminded people and stand out like the unique individual you are.