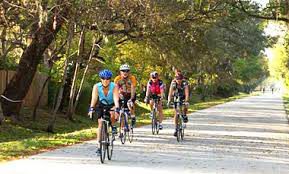 Florida is known as the sunshine state and for good reason.  With a virtually non-existent winter and brutally humid summers, the state lives up to its name.  For this very reason (to be outdoors year round), I moved from Chicago to Orlando several years ago.

One of the first things I did was invest in a bicycle.  As our society becomes more involved in minimizing our carbon footprint, especially students on college campuses, I wanted to reduce pollution any way I could. Relying on a bicycle instead of a car prompted me to explore the many trails and bike areas around Orlando.

Surprisingly, you don’t have to look far, if you live near campus. UCF has great places to bike ride.  But stay away from the breezeway and a few other areas where bicycles are not permitted. Because UCF is a newer campus, biking is easy and safe.  If you are looking for a more natural, trail experience, I recommend checking out the Arboretum which has a of couple paths for this purpose. This area is a nature preserve created for individuals who want to get away from all the bustle and hard work and take a break along the mile-long loops into nature.  The main reason I recommend one of these paths is for the sake of avoiding pedestrians.

Moving off campus, the closest biking trail to the University is the Little Econ Greenway which begins off of Alafaya Trail (State Road 434) at the intersection of Lokanotosa Trail.  This intersection is not far from campus and in fact, the off-campus student housing marks its entry point.  Once away from the housing, the bike path goes into a multitude of scenic forest areas as the trail parallels the Little Econ River.

One of the first destinations on this trail is Jay Blanchard Park.  This is a location frequented by East Orlando residents and students alike due to its convenient location within Rouse, Dean, Colonial, and University.  With its open fields and locations right next to the Little Econ River, there is plenty of wildlife encounters as well as being a location that can accommodate many physical and recreational activities.  Runners, hikers, cyclists and sport enthusiasts all make use of Jay Blanchard Park.

One of the aspects that makes the entire Little Econ Greenway a perfect cycling experience is beyond Blanchard Park, bikers are not forced to cross major intersections.  Instead, bikers, pass major roads via underpasses avoiding traffic on Dean Road, Econlockhatchee Trail, and The Central Florida Greenway (Toll Road 417).  There are ample opportunities to observe animals in their habitat.  I personally have observed alligators sun bathing on the trail after a heavy rainstorm.

My only concern with this trail lies at the other end.  After leaving the nature behind, the final segment on the Little Econ Greenway crosses with Goldenrod Road (State Road 551) which is a busy road and ends at Forsyth Road.  While Goldenrod has a traffic signal specifically for the trail crossing, it still can prove to be a dangerous crossing.  Forsyth, however, is another issue entirely.  This area is zoned mostly industrial and does not seem to be an optimal place for a trail to end.  Continuing via bicycle from this trail requires using main streets or sidewalks rather than the much safer trails.

The closest connector trail to the Little Econ is the Cady Way Trail which starts much farther east and north from the end of Little Econ Greenway at Forsyth Road. Located in Seminole County, this bike trail begins at Aloma Avenue (State Road 426) and Howell Branch Road/ Hall Road

At this juncture, the trail goes through the same industrial parks where the Little Econ Greenway ends. Views include junkyards and even a salt mine.  Not exactly the most viewable sights.  Unlike the other trail, there is no stoplight at either Goldenrod Road or Forsyth Road to protect cyclists.  However, on these sections of each trail, the roads are less traveled. Cyclists are rewarded with a massive bridge across Semoran Boulevard (State Road 436) which is quite a fantastic spot to do hill training as well as a place for a spectacular view at the very top of the bridge. Full Sail is to the south and Casselberry is to the north.

Beyond the bridge, the path turns works its way through Baldwin Park.  While the Cady Way Trail only skirts the extreme east and south sides of the area, multiple branching paths will take a cyclist farther into the region.  Baldwin Park is an incredibly nice area filled with shops, parks, and constantly has that walkable downtown feeling complete with cobblestone streets.

Continuing past Baldwin Park, the signage can be confusing.  The first few times I biked down this trail, I assumed that I had reached the end and was incorrect.  The Cady Way Trail continues behind Fashion Square Mall, which is located just north of East Colonial Drive (State Road 50) If a cyclist ends up at Colonial, they went too far.  The trail ends close to Lake Druid Park, just to the west of Fashion Square Mall.  This also allows a cyclist access to Downtown Orlando which is only a mile away.

Both bike paths are in relatively easy to access areas and allow students at University of Central Florida a way to reach Downtown Orlando as well as Winter Park without a car.  As Orlando continues to improve and make more bike paths and areas for pedestrians, these areas will serve as examples for those wanting to exercise and work on saving a few carbon footprints.  So cycling enthusiasts, try out these two trails and start exploring  Who knows what else you might discover?