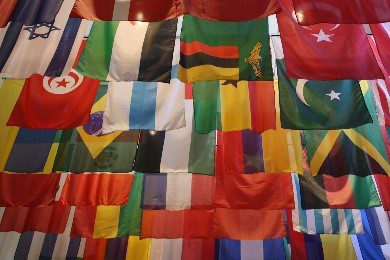 Defining cultural appropriation in this day and age can be a tricky task. Some of us believe we know what it is when we see it, but do we really? Simply put, cultural appropriation is taking a particular group’s way of life, ranging from their lifestyle, to traditions, heritage, dress, habits, values, and language. The person doing the “taking” is usually not part of the culture they are taking. The act of appropriating, then, raises questions like, can culture be shared? Or only certain parts of culture? Does appropriating a culture bring awareness about the culture to the forefront, which may eventually lead to appreciating the culture?

Claims of cultural appropriation have occurred when it comes to clothing. Insiya Mirza, a 22-year-old Indian student majoring in Nursing cites Coachella, a pop cultural event that is controversially known for taking many aspects of various minority cultures for the three-day event, as an example.

“People will go on and on about how Indian food is smelly and oily, but they have no problem wearing bindis, tikkas, nose rings and getting henna done.” Coachella has no known history in Indian or Native American culture; yet when the event comes around, the unspoken “dress code” from appropriating these cultures is put into effect. Insiya elaborates, “If someone wears it [traditional Desi clothes] for Halloween or a costume party, then no, that’s extremely disrespectful. My culture isn’t for entertainment purposes. They’re not meant for costume parties, they’re meant to pass down the tradition and values.”

When speaking about Native American Halloween costumes, a subject that stirs controversy, Miche says it’s down to “cherry picking[…]When Halloween comes around, that’s when you choose to appreciate that specific culture at that certain time. After that, more than likely, you don’t have anything to do with the culture, you’re not learning anything about it…it is accidental appropriation of a culture. A lot of kids are not aware of what they’re doing, a lot of parents aren’t aware that they’re giving their kids this [costume]. So I feel like it is cultural appropriation to an extent, people are just not aware of that.”

However, some exceptions may be made. For example, my big sister dressed up as Pocahontas for Halloween this year—not a Native American princess or tribe leader with a big headdress, but the mostly fictitious Disney princess. Background and personal experience here are important: my sister has dark skin and long, dark, jet black hair like Pocahontas—so much so that our mother nicknamed her “Poca” and still calls her that to this day. For this reason, she has a personal attachment to the character and wanted to dress up as Pocahontas. Besides our family, my sister’s personal attachment to Pocahontas is unknown to most, so it may be fair to assume that some who saw her on Halloween thought she may have been appropriating Native American culture.

Perhaps a conclusion may be drawn here: dressing up as someone’s overall culture (Native American, Indian) may be offensive, especially in a context where after you’re done with a party, you’re done with that culture. But perhaps it is okay to dress up as a character, or celebrity, or artist, or icon—people who are their own person and individuals that we admire. It’s not appropriating the whole cultural dress but appreciating the individual from that culture.

Hair is an issue in the topic of cultural appropriation that may be more sensitive to discuss. Why? A 23-year-old theater student of Dominican descent (who asked to be anonymously quoted) says, “People have had an issue with black people’s hair since forever. The years of being told our hair was ugly had a psychological impact. At one point, our hair prevented us from getting jobs because it was considered untidy or unkept. Our hair is kinky so we put it in braids, or cornrows, or colorful scarves. We had to spend hundreds of dollars on relaxers or going to the salon to get it smoothed out. And when we finally started loving ourselves again and our natural hair, now all of a sudden box braids are in and people gettin’ cornrows left and right—no!”

She seems visibly frustrated here, and when I ask for her to elaborate she says, “Look. There are some things white people just can’t do. I know the Kardashians-Jenners aren’t fully white or whatever but they put the rest of the world on box braids and cornrows—they have that kind of reach. But their hair isn’t coarse like ours, it’s not strong enough to withstand the twists of braids. They’ll have breakage, they’re damaging their hair! For us it works, but for thinner, ‘white girl hair’, you just can’t have our hairstyle. It wasn’t meant for that type of hair for a reason. But I feel like white people have never not had something they can’t have—so if they see it, they take it. Even if it doesn’t work for them, it don’t [sic.] matter.”

It is understandable that many issues that incite claims of cultural appropriation have been historically rooted in oppression, hair being no exception. There are some histories to cultures that are painful to discuss, that stem from years of colonial suffering, that raise questions about self-image and self-worth to members of the minority culture. Concerns minorities have about someone appropriating their culture seems to stem from people who partake but don’t realize, or care to take an interest in, the oppressive histories behind appropriation and what that means to the oppressed minority groups from which appropriated trends originated, like the Kardashian-Jenner clan. It seems when celebrities take on a trend, and it spreads like wildfire due to their immense popularity, it is credited to them. Although celebrities do not claim these appropriated trends, it does pose important questions about ownership. Can culture be owned? And by whom? Perhaps when ownership is given to a culturally appropriated trend is when people get upset.

Ownership and money when talking about cultural appropriation is more important than one might think. Many trends that have incited cries of cultural appropriation include clothing and hair. For example, many individual boutiques and stores sell Middle Eastern/Indian influenced clothes in the design and style. H&M announced a modest clothing line that some believed was a rip off of religious dress that associates with certain cultures, too. The issue here is when brands rip off minority cultures, brand it as their own, and reap the profits.

It may be concluded that the idea of “ownership,” claiming a trend and getting benefit or reward from it, is not appreciation at all. The monetary value gained at the end of the day negates any appreciation of the culture it originated from in the first place because members of that minority culture aren’t receiving credit in any form.

So how can one appreciate a culture, without accidentally appropriating? Take the time to educate yourself. Learn the history behind a culture; we can’t just latch on to the latest trend without researching the origins of it. We can’t just dismiss minorities who believe their culture is being appropriated without listening to their perspective. After all, if we learned, researched, and listened—isn’t that true cultural appreciation? To learn all aspects of the culture, including the histories and human experiences?

And what about people who appreciate a culture that is not their own, but their experiences have led them to a love of a culture? To this I say: judgement matters. It’s human impulse to judge, to place labels on people so we can group and sort them. But the problem with this is that we have no idea of another person’s experience—how their childhood influenced their present-day likes and dislikes, how their good and bad memories impact their day-to-day decisions. The same can be said for culture. No one knows what kinds of unique cultural experiences one has had to shape their cultural likes and dislikes. If we find ourselves jumping to conclusions about cultural appropriation: pause, take a step back. Wouldn’t it contribute to a more fruitful conversation if you asked someone who may be appropriating, “What’s your attachment to this culture? Or this music? Why do you like it?” It may open up a world of experiences about an individual that you would have otherwise never known.