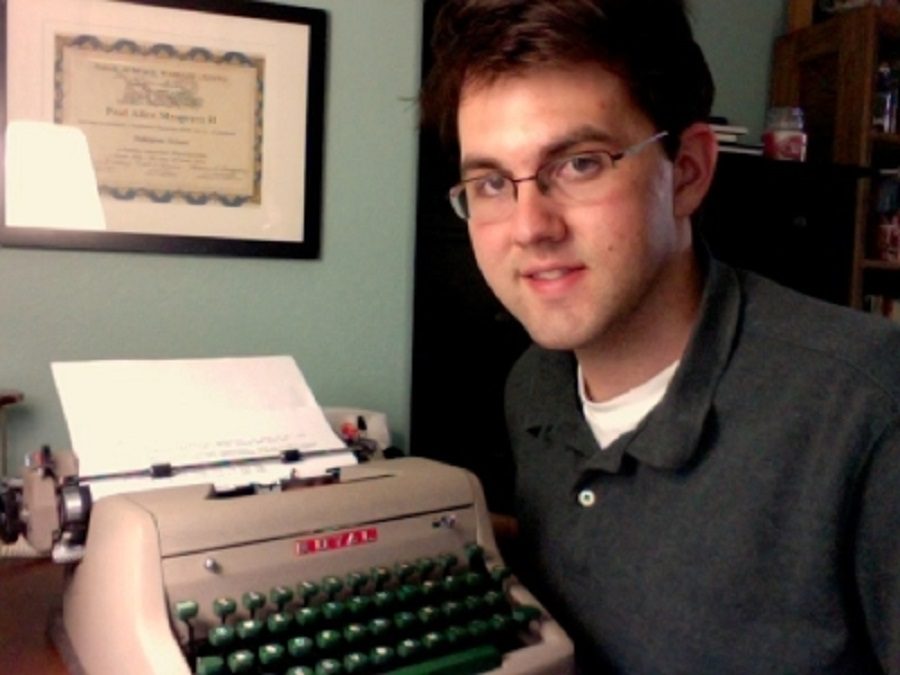 We are in the age of technology. Messages are now disseminated in microseconds through portals such as Twitter, Facebook, Tumblr, and many more endless possibilities. Everywhere I go I hear, “There’s an app for that!” and I am often distressed by the amount of times I look over at the driver next to me and their eyes are glued to their iPhone rather than the road they are driving on. The last thing I expect to hear is that anyone, especially not a student at one of the largest and mainly technologically–run schools in the nation is using a device that doesn’t have a SIM card or an insane amount of RAM. Yet, such a person does exist- and his name is Paul Musgrave, a senior at UCF.   And so, I went about interviewing Paul about his typewriting hobby, and in doing so, I began to look back at my own journey with technology.

I extensively questioned Paul about what it is like to have such a unique and rare hobby. I took a magnifying glass to the issue and found that things were not as they seemed. Paul has otherwise embraced all sorts of modern gadgets; he owns a MacBook Pro, an iPad, iPod, iPhone, a flat screen TV, a Wii, and even has a Netflix subscription. This was particularly surprising to me, as I had first assumed that Paul had taken on some sort of battle against technology and was on a personal strike. My assumption was beyond wrong. As Paul nicely put it, “Using a typewriter is like a mental workout. So I guess it just keeps me on my toes.”

Free of distraction (Facebook), Paul is able to get his writing done much faster and with much more ease. This fact didn’t necessarily surprise me but it definitely caught me off guard. I thought he would have a much more radical explanation for using such an old school device; but after my interview, I find myself wondering, “Why don’t more people do it like Paul does?” After all, who isn’t sick of procrastinating on Facebook for 3 out of the 4 hours you spend on your homework? How much more productive would we all be? I think Paul’s got the right idea… sometimes its best to go back to the basics.

After our initial interview, I found myself to be even more mystified by Paul’s typewriting tendencies. At first I just thought it was a hobby (Who doesn’t have one?) but then I realized that it really is much more than that. It’s a tribute to a previous lifestyle. His use of a typewriter causes him to look at writing, and life in general, from a fresh and thought-provoking perspective. As Paul explained, “It also makes you appreciate technology more. People take for granted a lot of what we have today. Myself included.” I couldn’t agree more.

I too, am also guilty of taking this technology for granted. I began to wonder if things were always this way, and if not, how did our society become such technology fanatics? I would like to take you back to a more simple and serene time in your life–your childhood. Do you remember that anticipation of getting home from school, running home to change clothes and then meeting up with the neighborhood kids to explore, slide, paint, tag, run, cartwheel or whatever else you and your friends enjoyed? I do! Nothing could compare to the satisfaction I felt, returning home around sundown, sweaty and worn-out from running round the neighborhood “getting myself into trouble,” as my mother would say. But these technologically sparse times were my elementary school years and as we all know, times have changed. Do you remember when caller ID became wildly popular? Yep, that was considered a technological innovation about only 10 years ago.

As I grew into a moody adolescent my new after-school appetite included a daily four-o’clock program, MTV’s Total Request Live, or TRL as we called it. By “we” I’m referring to my current girlfriends. Although we were still extremely social thirteen year olds, our relationships became much more long-distance. Our deepest conversations occurred over AOL’s Instant Messenger (AIM) and in teen chat rooms. I felt much braver hiding my pre-teen awkwardness behind a computer screen, along with the rest of my generation. As I sat in front of my father’s huge and (at the time) very modern free-standing projector TV, I relished this new ability to be on the computer at the same time I was watching TV in the living room. And although my dial-up connection still took fifteen minutes to load, when I was “on-line,” and “tuned-in,” I felt connected. What had started as a guilty pleasure soon evolved into reliance, almost an addiction in both myself and our society to constantly feel “linked-in” or “connected.”

During my high school years the wildfire of MySpace ran its course and was put out a few years later by Facebook, a new height in social networking. During my sophomore year my mother (a late bloomer) finally gave up on dial-up and I was very proud to welcome broadband internet into our home! To put you into perspective, this “dial-up internet” from our past held a download speed 100 times slower than what we have today (something I definitely take for granted!). Long gone are these innocent online messages of my tween-dom. Popularity is no longer measured by the amount of real friends you have, but the amount of Facebook “friends.” My fourteen-year-old sister is living proof of these changes. I remember a recent phone conversation with her; as we were catching up when she suddenly let out a shriek of happiness and I was immediately inquisitive, “What is it Emma? Emma?” She quickly responded, “OMG Hanna. I just got 164 likes on my new picture in 4 hours! I’m so popular!”

Coming back to reality, it was time for me to see Paul’s piece of history for myself. As we met up in groups during class, Paul made his way to our corner with a camel-colored, boxy briefcase in tow. As he sat down and unveiled his contraption, my group looked on in awe. This mysterious machine caught me off guard and I found myself suddenly intimidated by this ghost of the laptops’ past that stood out like a sore thumb. What a majestic piece of machinery! This creature felt much more alive to me than my Dell Inspiron laptop, sleeping quietly next to me. I hesitantly pressed down on a few keys. The motion felt genuine, and sparked a new type of connection: from mind to written word. Gone was the constant clutter of seven different internet tabs open at once. There was no Facebook to hide behind and no spell check to save me. Surprisingly, this came as a relief.

Are we better off now? I’ll leave this question up to you. As technology has evolved, so has the nature of human communication. Hour long phone calls catching up with distant friends have been replaced with a habitual glance down a friend’s Facebook page to see what they’ve been up to. Well, next time I am going to call instead. As Paul says, “Sometimes technology seems to take hold of a person.” I personally think it’s time for all of us to take a breather. From typewriting tendencies to phone-calls, the remedy is the same: take a break from your laptop every once in a while and remember to smell the roses. Enjoy the simplicity of life. Think twice the next time you open up Microsoft Office, with its mistake-proof spell-check, and easy-to-download templates. There is a reality that exists where a person sits down and just writes that gosh-darn paper, rather than tweeting fifty times about it first. For better or worse, everything has its trade-offs. I never thought twice about how much of a role my computer plays in my life until I interviewed “Paul the Typist.” And he has caused me to ask myself, “Would I be the same person without it?”