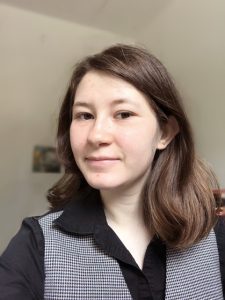 Ruinous Wings is a young adult fantasy novel that examines the drive to seek power and how the power of others can shape our lives. In a world where the gods grant magic to favored mortals through divine birds, those who lack the proper training and affluence are often left at the mercy of Volitants, those who have been blessed with magic. Aina is a pickpocket whose only trusted friend was killed in a Volitant’s battle. Vib is a thief and a liar obsessed with the pursuit of fame, even as she runs from her past. Kay is an apprentice historian in a Volitant temple, trapped in a life he does not want for the crimes of his family. When Aina steals a divine bird and is given destructive magic from a mysterious god, the three must work together to stop a brewing war and decide what power is worth to them.

The Volitants had appeared at the end of the line, riding pale horses. They were not in uniform, instead dressing however they pleased, their spines a little straighter, their faces more serene, and on their gauntleted fists they carried their great Caelum birds with their glossy black and gold feathers and fierce golden eyes. There were nine of them present, all gods-blessed and gleaming, but her gaze rested on the man at the head dressed in a long red coat who rode a magnificent warhorse. His face was less serene than it was impassive. His eyes, a flinty blue, roamed the crowds with the lazy scrutiny of a cat confident in its place. At his side, he carried a great sword, and his bird hunched low on his fist, less like the sharper birds of the other Volitants and more like a vulture.

This man could only be Orthos, favorite of the war god’s servants, champion of the kingdom of Valland. The ruthless hunter, the winged wolf, the bane of nations. The most powerful man in a kingdom without kings.