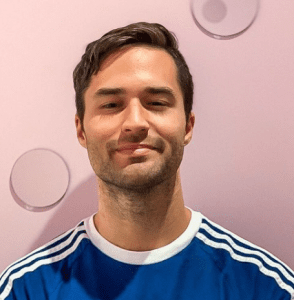 Moneyboys is a novel that explores queer identity in the early 2000s, in the final few years of the height of the American boy band craze. The story’s protagonist must reconcile her own identity with what she views as two increasingly opposed goals: to make space for other queer people in turn-of-the-century Tinseltown and to continue getting hers. Her pursuit of these goals, her life outside of the fame machine, and the glossy, holographic, six-packed residents of the internet cause her to forge different versions of realness – an ability to define and embody an idea until it’s the truth – for herself, for the band of publicly-closeted and mostly-queer boys she manages, and for the American boy band consumer. Because this is still the turn of the millennium, she’s accompanied by hybrid intermissions of morning commute radio, basic cable news tabloids, and IM conversations – none of which makes it any easier for her to discover or remember what is truly real. Though this is, of course, what she must attempt to do.

Boy Band 104: it’s all supposed to look effortless, even though everyone involved knows that it’s not. It’s supposed to be like deodorant, there and pleasant, inoffensive – but deeply, unbendingly effective. And, as Jenna knows, nerds need deodorant. Boy bands are what this audience longs for – they’re emblematic of effort transforming into coolness, one of the few essences so pure it’s safely immeasurable. Where other execs had seen their audiences with small glows, maybe a pleasantly-bloated deltoid just south of each ear, Jenna had known to market to those who’d listen quietly, dance only in rooms devoid of other people. They’d twirl through parents’ basements, dodge other servers during late-night shifts, and sing along in a whisper, all part of an unnoticed network. Like Tom in his underwear but heavier, with more cellulite. Individually, nerds – people like Jenna, she’ll even admit it, OK? – aren’t the type of audience that the groomers and bodily arrangers of Hollywood want to think about. But together, it is them – the shy, the horny, the pale – that have blipped into a network that’s propelled the Moneyboys, by the start of ‘03, to chart spots so consistently above the ground that they come with a concierge. They consume, they pay, they spurt back data. They trail their hands across their bodies in bed as they think about the boys, the beautiful boys, to the point where their imagined selves become so removed from what’s real that soon, they’re just a vestige of their image of their favorite bandmate. Jenna has seen the chatrooms – the screencaps of 180p videos of the boys mid-lunge at concerts, circles and lines superimposed across their crotches in an effort to triangulate the exact shapes of their genitals. She knows she’s turned the Moneyboys into an entity nerds believe are worth more work than their jobs, their lives beyond the internet, their lives at all. And what’s even better is the nerds are quiet, appreciative – couldn’t cause an issue if they tried.

Or, at least, that’s what Jenna had thought until this morning, when the bespectacled spreadsheet jockeys from the CS program at USC left her with an accordion-folded printout that may weigh more than she does. It’s a report, delivered as promised, from The Thompson Lab. It says that the boys are perceived by audiences as more feminine, that they’ll be part of the origin point for a crisis of masculinity in the late naughties, that they’ll turn the nerd market into people who care about themselves before the boys they’ve idolized, and twist common advertising knowhow into a gnarled, useless display.