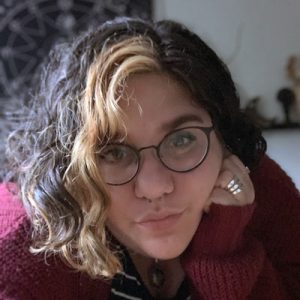 This Might Get Heavy is a collection of essays which explores intersecting themes of body image, mental illness, and sexual identity. Through these personal essays, Mayer explores and interrogates the societal norms and tendencies that have formed the shape into which she has forced herself both mentally and physically.

In essays such as “The Point System” and “Refraction,” Mayer uses memoir to depict the origins of her struggles with body image and disordered eating. “Tara’s Body Quiz and Answer Guide” and “How to Determine Your Sexuality: A Guide to Finding Your Letter in the Acronym” inhabit “hermit crab” forms to break through emotional barriers and question the need for conformity. Other essays, like “Green Tea and Giant Donuts” and “(Potentially Unwanted) Letters from Your Former Self,” act as thematic bridges that explore the ways body image and sexuality can influence one another, ultimately helping Mayer to unearth previously undiscovered pieces of her identity.

This Might Get Heavy uses several voices and forms to address and break away from the perceived expectations that have ruled the narrator’s life. It is both a reflection on the ways in which a body is built and a rebellion against the binding that holds these parts together.

Our bodies are weapons. Dangerous. The fat we contain is a bomb waiting to go off. The larger the bomb, the bigger the explosion. But if our wires cross, which way will the bomb detonate?

Our bodies are your weapons. You take my hips from me, sharpen bones to points that carve out the words “too wide”. You take my stomach, stretch it whip-thin with a crack that sounds like the word “fat.” You take my arms, carve down flab until they are hilt to your sword. I can’t remember these parts. When did they stop being part of me? When did you learn to wield them? And when there is nothing left of me, will that be enough for you?

Fat women everywhere, dead, like the radiation has spread and claimed them all for not being thin enough. Only the thinnest survive, and the curves will be forgotten about and no one will ever be fat again and America will be sane again because everyone’s body is the same.

Our bodies are our weapons. Comfort in this skin—with its folds, pockmarks, and sags—is an act of political violence. Celebrate every molecule: fat, muscle, blood. Be worshipped. Exist. Resist. Survive. Take back the weapons that they have stolen.