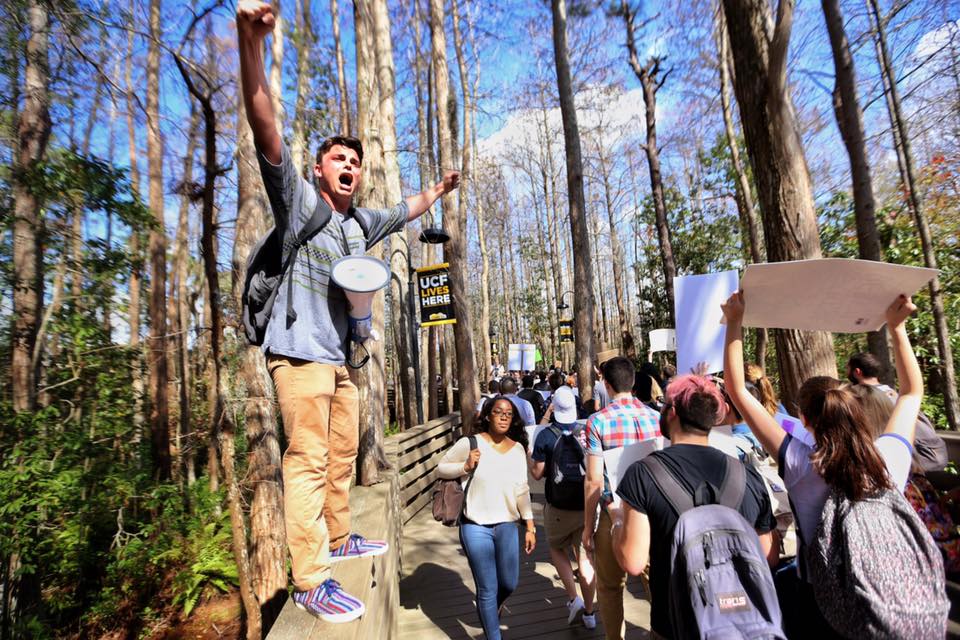 The Women’s March on Washington on January 21, 2017 left a global print on the divisive political landscape following the elections, spurring protests and marches across the nation for other causes in the name of activism. However, these protests and “sister” marches would have not been made possible without the work of student activists helping as organizers, participants, and social media marketers. We saw their work within Orlando itself through the Rally to Support Central Florida Muslims at the Orlando International Airport, Take Back the Night at the University of Central Florida (UCF), the counter-protest to the Trump rally at Lake Eola, and March for Humanity at UCF.

One such student activist, UCF senior Grayson Lanza of the 11/9 Coalition, describes why he helped organize the counter-protest to the Trump rally on March 4th.

“We felt that letting people from out of town that support a president so opposed to the ideals of the Orlando community come unopposed would be a failing on mine and the organizers part,” said Lanza. “I feel that it helped the community express some frustration against the policies that have been impacting it, and also showed those that we protested against that there are plenty of people who oppose what they stand for.”

Lanza has helped organized many marches within the Orlando area, including the March for Humanity and Orlando International Airport rally—both in support of refugees, DACA students, and immigrants. He has proven that being a student does not equate to standing idly by the sidelines.

UCF student activists do not necessarily have to organize events on a larger scale to make an impact within their community, either. Kayla Infantino, Secretary of the National Organization for Women at UCF, organized Take Back the Night to show support for survivors of sexual violence and to raise awareness of the issue on college campuses.

When asked for her advice to budding student activists, Infantino stressed collaboration as a key to the process of organizing.

“Even if you have no experience…planning events, as long as you have a good group of people around you, everything will be fine. You learn as you go. You can’t do everything, but staying positive and passionate about what you’re doing will make sure it works out in the end,” said Infantino.

Even with the help of allies, organizing events can be overwhelming to students just beginning in their political activism. Yet, student activism at UCF―whether through rallies, marches, calling representatives, or simply voting―can and will make a difference in today’s political climate. Fight for what you believe in; you can shift waves, no matter how young or old you are. Remember that there are other student activists out there within the Orlando community as well.  Reach out to them. Working together as a community on a common cause will not only bring people together, but it can also inspire others to do the same.