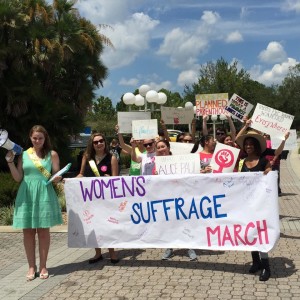 On August 26, the Women’s and Gender Studies program along with the College Democrats, the National Organization for Women and the Voices of Planned Parenthood, met to commemorate the 19th Amendment and the right of women to vote.

Two dozen students joined the march from Milican Hall to the Student Union and back. This year’s march was preceded by speakers Anna V. Eskamani, Southeast and Central Florida Planned Parenthood, Senator Geraldine Thompson, District 7 and Dr. M. C. Santana, director of the Women’s and Gender Studies program in the College of Arts and Humanities.

You can read more about the march at the Central Florida Future.