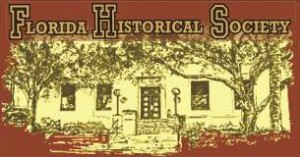 Of course, both the collections and the publication depended on whether “our members and friends will sustain us with such financial aid as may be necessary.” At the time, annual dues were five dollars, but Society officers still had trouble collecting. “Don’t make it necessary for those who are devoting their time and labor in the interest of the Society, without financial compensation, to have to send a second notification to delinquent members,” admonished President F.P. Fleming in 1908!

Today, the Florida Historical Society is thriving, and its immediate future is exciting. The Society has grown from its early days in a “commodious” room of the Jacksonville Public Library to its current home in a renovated U.S. Post Office in Cocoa. The Society has evolved in its mission as well: dedicated to preserving Florida’s past through collection and archival maintenance, through scholarly research and publication, and through public history, historic preservation, and youth education.

The Florida Historical Quarterly has likewise evolved. From his office at the University of Florida, Prof. Samuel Proctor edited the FHQ for nearly thirty years, from 1964 to 1993, before handing editorial control over to Prof. George E. Pozzetta at the University of South Florida. Less than two years later, however, Pozzetta passed away, and Proctor graciously returned to the editorship until someone new could be found. In late 1995, Prof. Jerrell Schofner succeeded Proctor as interim editor, establishing a partnership between the Florida Historical Society and the University of Central Florida. The following year, Prof. Kari Fredrickson assumed editorship for a four-year term. Her interests in social history expanded the breadth of historical topics covered in the FHQ and further strengthened an already well-respected journal.

In 2000 Craig Thompson Friend became editor of the FHQ. Under his editorship, the Quarterly added an occasional feature called the “Florida Room.” Named for the enclosed patios where Floridians, forced indoors by heat, mosquitoes, and humidity, entertain guests and casually relax, mingle, and share informal essays, the Florida Room feature is designed to engage readers more directly in recent regional developments.

Since 2005, Connie L. Lester, Associate Professor in History, has been the editor of the Florida Historical Quarterly. In 2011, the FHQ added an Assistant Editor, Daniel Murphree, Associate Professor in History. Published four times annually, the FHQ promotes scholarly research and appreciation for the peoples, places, and diversity of Florida’s past. A peer-reviewed journal, the FHQ has entered the digital world in several exciting ways. The Quarterly produces a podcast for each issue featuring an interview with one or more authors. This website will also feature images and interactive research. Past issues of the Quarterly are available online through JSTOR and Palmm. Finally, with the addition of a Digital Editor, the Quarterly has initiated new research using the journal itself to understand new historiographic paradigms.

Note: Quotes in the first three paragraphs are from “Prospectus,” Publications of the Florida Historical Society 1 (April 1908): 3-4; quote from Dr. John B. Boles is from John B. Boles to Edmund F. Kallina, 10 September 2002, and John B. Boles to Rosalind J. Beiler, 13 August 2008, FHQ editorial offices, University of Central Florida, Orlando.