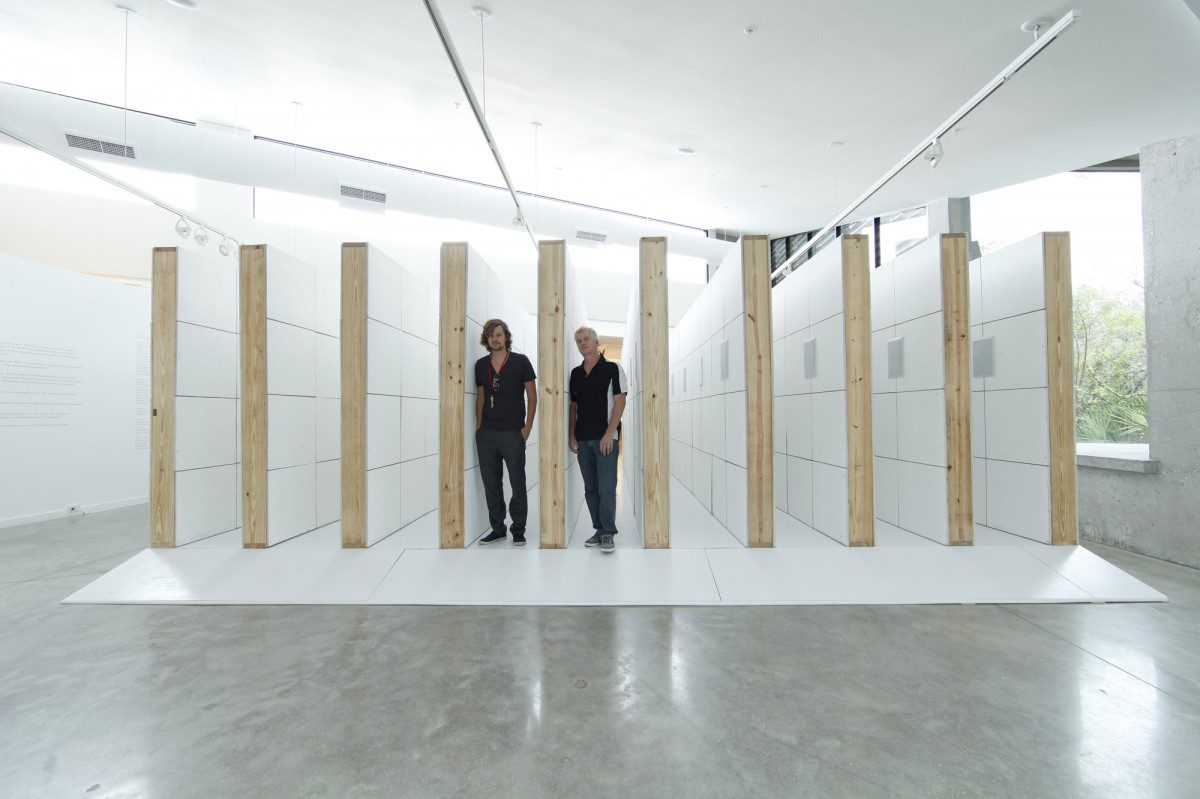 Progeny is an International Collaborative Project, featuring the work of Luke Aaron Clark (UK) and Bryce Hammond (USA). The exhibition focuses on an immersive architectural sound installation modeled after a Langstroth Beehive. There are ten partitions covered in acoustic paneling, with 48 microphones and 36 speakers that transmit every single sound originated in the space.

Progeny is the result of three years of research and partnership, working in concert with the agricultural community, structural engineers and sound experts.

In location, Progeny becomes an instrument or a platform for public interaction, artistic collaboration and performance, providing unique opportunities for the audience to experience and engage with the work. 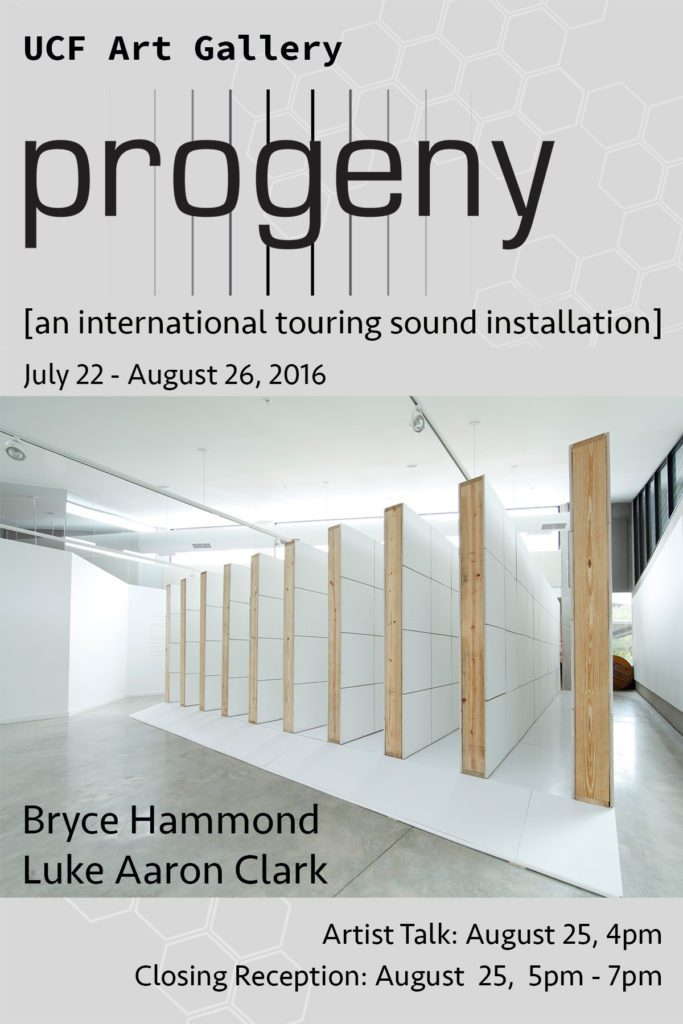 Apiary Doug McGinnis will discuss how flowers taught bees to be vegetarian, functions of bee society and the super organism. McGinnis is a member of the Atlantic Center for the Arts Board of Trustees. His family business, Tropical Blossom Honey Co., has been collecting honey from beekeepers in Florida since the 1940’s. He established an apiary on ACA grounds for visiting artists to observe the bees feasting on the wide variety of native flowers.

PANEL DISCUSSION: Every Room Has A Sound

PERFORMANCE:  In the Hive

The artists Bryce Hammond and Luke Aaron Clark have figuratively become beekeepers. The hive-based installation is man-made. The structure is disassembled, transported on a flatbed truck to another temporary location where it is reassembled.

The structure is designed whereby every unit is constructed using 4’ x 8’ frames, including walls and flooring. Ten independent walls create nine narrow corridors 24 ft in length. The narrow width of each corridor compels close public interaction. The space above the walls is designed without a joining ceiling. 32 contact microphones under the flooring of the structure pick up the vibrations of people’s footsteps. These, alongside 16 microphones within the walls, transmit sound to 36 speakers throughout the installation.

This travelling time-based work explores the point at which an artwork is ready for the viewer. Progeny’s journey, from one location to another, is as much part of the work as when it is assembled for public exhibition. It is neither stationary in its physical or intellectual state, constantly evolving through travel and through the communities it interacts with.

Emulating the systematic migratory procession beekeepers undertake, carrying up to 400 hives on flatbed trucks to temporary locations, Progeny’s journey is documented by film and online media and forms part of future exhibitions.

The project includes an education program that encourages children and adults to care for our natural environment, and which also explores the theme of community, by using bee society as a comparative model.

Bryce Hammond, b. 1970 Daytona Beach, Florida. Bryce Hammond received his BA in Art History from Furman University in 1992, and his MFA in Emerging Media from University of Central Florida in 2013. He has had solo exhibitions around the US including New York, Los Angeles and Atlanta among many others. His paintings are held in major corporate and private collections throughout the United States. Mr. Hammond has received the Sam and Adele Golden Foundation Fellowship, Florida Fellowship for the Arts, the Gulnar Bosch travel grant, and Fiscal Sponsorship from the New York Foundation for the Arts.

Hammond records evidence of human presence in man-made environments through first-hand observation of poverty culture. This data is compiled to pollinate and present diverse techniques of expression including participatory installation, voyeuristic sound and documentation through paintings and other art objects.

Luke Aaron Clark, b. 1978, Brighton UK.  Luke Aaron Clark is a composer and sound artist. His work explores the relationship between architecture and sound, our natural environment and everyday human interaction within these settings. These works are reliant on the combination of research, exploration and collaboration and expressed through performance, sound design, public intervention, architectural installation and film.
Luke’s work has been exhibited in Europe, South America and USA.  He has been an associate artist and artist-in-residence at Atlantic Center For The Arts, Florida, Campos de Gutiérrez in Medellin, Colombia and at the Artkommunalka Museum Residency in Kolomna, Russia.  Luke’s work was included in the Cine Prive film festival in Gent, Belgium and the Sorsicorti film festival in Palermo Italy. He has received Fiscal Sponsorship from the New York Foundation for the Arts and has been awarded grants by the Sally Mead Hands Foundation and the Centre of Cultural Initiatives in Moscow.
Luke Aaron Clark works and lives between USA, France and the UK.
Progeny Images:
Live Installation Images- Coming Soon!
(July 29 – August 5)
Progeny Links:
https://vimeo.com/80495740
http://theprogenyproject.com/
www.installationmag.com/progeny-an-international-collaborative-project/
www.globalgiving.org/projects/progeny/
https://cah.ucf.edu/gallery/exhibit/progeny/
Progeny on Facebook
https://www.facebook.com/progenyproject
Progeny on Twitter
https://twitter.com/progenyproject
Progeny is presented in partnership with and sponsored by: