A Cold and Overcast Day 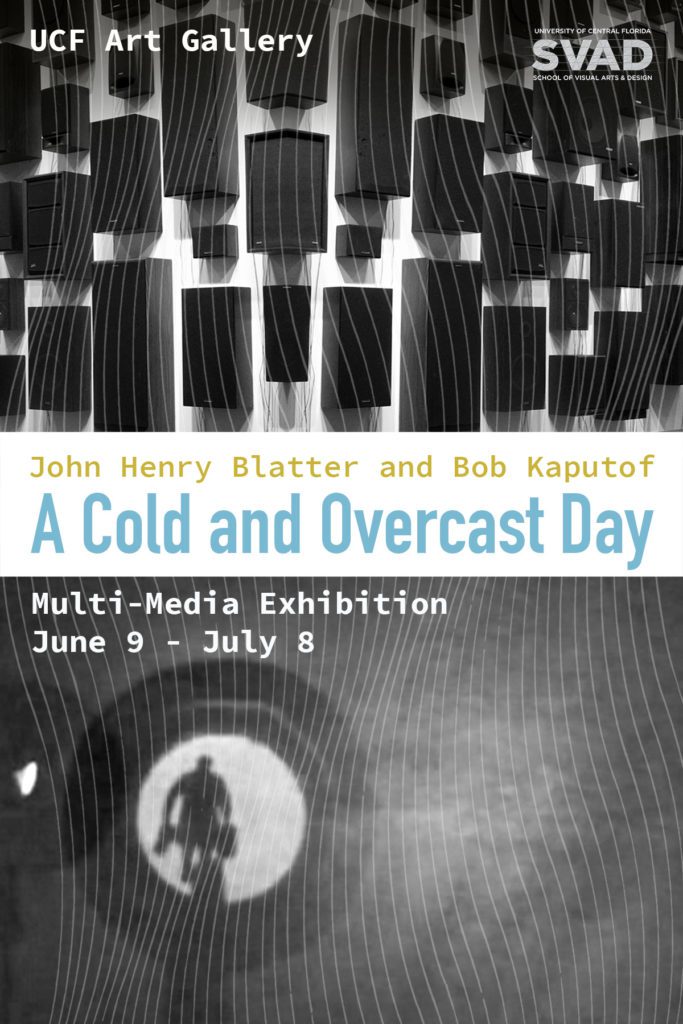 Bob Kaputof is an Associate Professor at Virginia Commonwealth University, currently teaching in the Kinetic Imaging Department. He has taught in both the Design and Kinetic Imaging departments at VCU and led the K.I. Department from 2003-2010. He has screened work at the Dallas Video Festival; the Pacific Film Archives; Berkeley and Mill Valley Film & Video Festival and other venues.

I have created a random narrative of images with light, lens and object, which I liken to a dreamscape with flashes of electricity, which create shadows of ideas, memories and desires. I have set up a series of analog bulbs with lenses positioned in front of and in back of them. These bulbs are flashing and are placed at different heights and distances from various objects. The objects catch the light of the flashing bulbs and create a series of patterns and shadows.

The effect is random. The images can be singular. But often times the images occur in combinations akin to the firing of neurons in the brain.

There is also a sound component produced by placing a speaker downstream of the bulbs. This creates a soundtrack that is generated by these flashing lights.

John Henry Blatter is the Interdisciplinary Technologist for VCU School of the Arts. He mentors and facilitates artists and designers to pursue collaboration and exploration of all types at The Depot,  a new facility at VCU that is dedicated to interdisciplinary collaborations, events and creative entrepreneurship education.

John Henry’s audio/video installations and collaborative works have been exhibited in New York, Miami, Washington DC, Philadelphia, Cincinnati, Omaha, Pittsburg as well as internationally in British Columbia, Basel and Istanbul. He was Artist in Residence at Bemis Center for Contemporary Art and the Vermont Studio Center and a recipient of the Jacob Javits Fellowship. Blatter was the founder and editor-in-chief of the Daily Constitutional, an artist run publication that focused on the Artist’s voice. Most recently, he collaborated with Ryan Holladay, Artisphere’s New Media Curator, to mount the regions first major sound art exhibition.

The idea of art as experience has been a large part of my development towards installation, video, and now sound installation in my work, and away from more traditional sculpture where I began. My use of video and sound within the installations are not because I am a media artist, but because it is the best medium in which to convey the ideas within the work. I have used various forms of video and sound within my work, from Walkman sized monitors to room sized installations, pieces as intimate as family photos and as public as a virtual garden that invites the viewer to participate by placing them within the video image. Over the past several years, I have become the subject matter within my work. While the content and imagery of the work is often very personal in content, the experiences behind them are universal. I explore topics within the work ranging from the struggle to define and understand a self identity, to our anxieties and fears of how others perceive us, to the perception of an individual’s facade and how they relate as an individual in a society.

In our society, the technology of media has become such an integrated part of our lives that it has created a perverse sense of reality, and in the work I am exploring, questioning and testing this reality. There has become such media sensory overload, that I have begun to wonder if this virtual world has desensitized us for what is actually real. Is media stimulation alone, enough for us to forgo all of our other senses? For example, can these glowing images or realistic sounds, provide us with the same comfort and reassurance as a hug? And if so, is that enough?

Free and Open to the Public!!