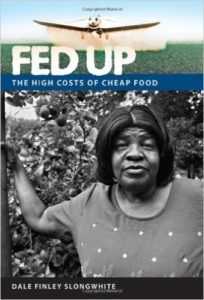 Fed Up: The High Costs of Cheap Food

Dale Slongwhite will discuss her book, Fed Up: The High Costs of Cheap Food, which presents oral histories of African American farmworkers whose lives were forever altered by one of the most disturbing pesticide exposure incidents in United States’ history.

Free and Open to the Public!

In Fed Up, Dale Slongwhite collects the nearly inconceivable and chilling oral histories of African American farmworkers whose lives, and those of their families, were forever altered by one of the most disturbing pesticide exposure incidents in United States’ history.

For decades, the farms around Lake Apopka, Florida’s third largest lake, were sprayed with chemicals ranging from the now-banned DDT to toxaphene. Among the most productive farmlands in America, the fields were repeatedly covered with organochlorine pesticides, also known as persistent organic pollutants. The once-clear waters of the lake turned pea green from decades of pesticide-related run-off. Research proved that birds, alligators, and fish were all harmed. And still the farmworkers planted, harvested, packed, and shipped produce all over the country, enduring scorching sun, snakes, rats, injuries, substandard housing, and low wages. All the while, endocrine-disruptor chemicals were dropped over their heads by crop dusters as they labored in the poison-saturated fields.

Eventually, state and federal dollars were allocated to buy out and close farms to attempt land restoration, water clean up, and wildlife protection. But the farmworkers became statistics–nameless casualties history almost forgot. Here are their stories, told in their own words.