David Haxton will speak at the Center for Emerging Media in Downtown Orlando.

David Haxton (b. 1943, Indianapolis Indiana) is an artist who works primarily in photography and film. His current work is concentrated in the use of the photographed image. As it has always been, Haxton’s work is approached from a painter’s perspective and more specifically current thinking that is sourced in objectivity, intermingled with process and materials. In the early seventies he moved away from painting and made the film installation “Four Screen Films”. The piece is about the reconstruction of one space into another. Several other installation films were made during that time, each with the purpose of reconstructing one space within another. His first New York exhibition of these film installations was at Sonnabend Gallery. It was a group exhibition of films with Vito Acconci, John Baldessari and David Shulman. He showed the Installation film “Three Changes”.

In 1976 Haxton became interested in making photographs; again, as with the films, starting with his painter’s point of view. He also wanted, as in the single screen films, to make photographs that referred to themselves and their own fundamental nature. Therefore photographic backdrop paper and light were the ideal things to photograph. Haxton’s photographs were first shown in a Solo exhibition at Sonnabend Paris, 1978. In the 1980’s the photographs were shown at Sonnabend New York, The Whitney Biennial, and at various other venues in the US and Europe.

Haxton concentrated on his professorial duties during the nineties. He returned to showing his photographic work in 2003. His most recent Solo exhibition was at Gavlak Gallery in Palm Beach Florida, November 2012. In 2012 his film “Painting Room Lights” was included in a semi permanent exhibition titled “Watch This! New Directions in the Art of the Moving Image” at the Smithsonian American Art Museum. The Smithsonian has also included Haxton’s films in their permanent collection. The Whitney Museum has recently acquired sixteen of his films for their permanent collection. In 1978 the Whitney presented a two-person exhibition of photographs by Jan Groover and David Haxton. His films are included in the permanent collection of the MoMA. In 1978 he was featured in MoMA’s Cineprobe series. Selected other collections include: The Indianapolis Museum of Art, Albright Knox Gallery, National Gallery of Art, Canberra, Australia, Maslow Collection in Scranton, Pa., Denver Museum of Art, and the Chicago Art Institute. 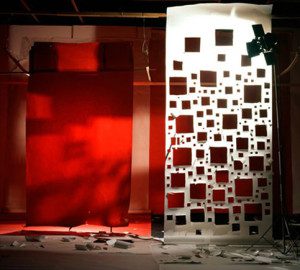