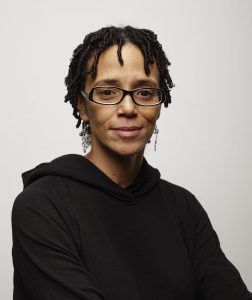 “… I wanted to make sense out of the clashes between cultures that cause so many of us so much trouble and pain, but I chose to do so within the realm of art.” -Coco Fusco

Coco Fusco is an interdisciplinary artist, writer and curator, who lives and works in North America. For much of her work explores the politics of gender, race, war, and identity through multi-media productions incorporating large-scale projections, closed-circuit television, web-based live streaming performances with audience interaction, as well as performances at cultural events that actively engage with the audience.

Fusco is the Andrew Banks Endowed Professor of Art at the University of Florida and author of English is Broken Here: Notes on Cultural Fusion in the Americas (1995), The Bodies that Were Not Ours and Other Writings (2001), and A Field Guide for Female Interrogators (2008). She is the editor of Corpus Delecti: Performance Art of the Americas (1999) and Only Skin Deep: Changing Visions of the American Self (2003). Her most recent book Dangerous Moves: Performance and Politics in Cuba was released by Tate Publications (2015).

She has won numerous awards, including: 2016 Greenfield Prize in Visual Art; Guggenheim Fellowship (2013); Absolut Art Award for Art Writing (2013); CINTAS Foundation Visual Arts Fellowship (2014–2015); USA Berman Bloch Fellow (2012); and Herb Alpert Award in the Arts (2003). Fusco received her B.A. in Semiotics from Brown University (1982), her M.A. in Modern Thought and Literature from Stanford University (1985), and her Ph.D. in Art and Visual Culture from Middlesex University (2007). Since 1988, she has performed, lectured, exhibited, and curated around the world. Fusco lives and works in Gainesville, FL and New York, NY.

Observations of Predation in Humans: A Lecture by Dr. Zira, Animal Psychologist | Performance
2013

This event is sponsored by the University of Central Florida’s College of Arts and Humanities and School of Visual Arts and Design, the Big Read, Flying Horse Editions and Sunspot Cinema.