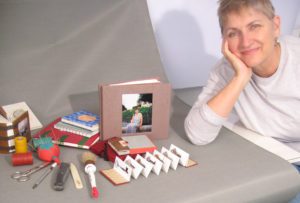 In conjunction with UCF’s Special Collections, Bea Nettles will talk about her photography, artist books and career spanning 40 years. Many of her books from the Special Collection’s permanent collection will be available to view.

Be a Nettles’  artists’ books and photographic works often using alternative photographic processes, juxtaposing multiple images, or incorporating text. After earning a BFA at the University of Florida in 1968, Nettles went on to pursue an MFA at the University of Illinois. She graduated in 1970 and participated in her first major exhibition later that year, when her work was featured in Photography into Sculpture at the Museum of Modern Art, New York. In the following decades Nettles continued to take an experimental approach to photography, which has been influential, exploring the limits of the medium and helping to usher in the widespread use of photography in mixed media works. In 1977, she published a how-to guide devoted to alternative processes, entitled “Breaking the Rules: A Photo Media Cookbook.”
Much of Nettles’ work has an autobiographical foundation, as exemplified in one of her best known photographic books, Life Lessons: A Mother’s Journal. In this long-term project, which she started after the birth of her first child in 1978, Nettles reflects unsentimentally on the experience of motherhood through black and white photographs and textual elements. In the mid-1990s, when Nettles was in her late forties, she began a series titled Turning 50, which she eventually published as a small-sized book. One of the photographs from this series, a self-portrait, is a central element in the mixed-media work Birch Bark (1995), which Nettles made in collaboration with Marilyn Sward and Audrey Niffenegger at the Chicago Center for the Book Arts. Nettles’ photograph, printed at an intimate size, is stitched to a sheet of paper that was handmade by Sward and subsequently imprinted by Niffenegger with a birch bark pattern from a polymer plate. The printed paper covers over the photograph but the artists have cut a square flap that the viewer can lift up, as if peeling away the bark, to see the picture underneath. Since 1984 she has taught at the University of Illinois, Urbana-Champaign, where she is currently Professor Emerita.