Please join at the UCF Gallery for the

This activity is sponsored by the Art History Club and organized by Dr. Ilenia Colón Mendoza.

Thank you to Dr. Keri Watson and Dr. Margaret Zaho for reviewing the papers. 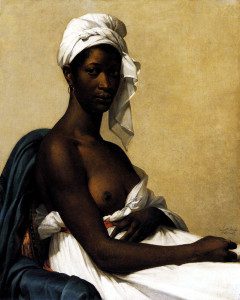 In the late 18th and early 19th centuries, pursuing art as a woman was an incomprehensible feat. Staying relevant and producing a substantial oeuvre as a female artist was even more difficult. This is largely due to institutional and societal rules, particularly the lack of access to male nude models; a necessary component in neoclassical history painting, the most respected genre of the time. However, the students of Neoclassicism’s master, Jacques-Louis David, prove otherwise and have remarkable careers each in their respected genre, including history painting. Twenty-two female artists are recorded as students of David, many of whose names are lost. In this analysis I will be focusing on two of the most talented female students of David, perhaps two of the most exceptional artists of Neoclassicism, Marie-Guillemine Benoist and Angélique Mongez. Benoist is known primarily for portraiture, the expected genre of a woman. However, who Benoist chose to paint, a freed negress, was extraordinary. Mongez and her husband were personal friends of David, and she does not have a piece exhibited at the Salon until she was twenty-six. Over the course of her long career, critics doubted her authorship and were shocked at her rendering of the male nude. Benoist and Mongez, two students of the progressive teacher David, contributed their unique female voices to Neoclassicism and thus, merit the title of definitive artists in Post-Revolutionary France. 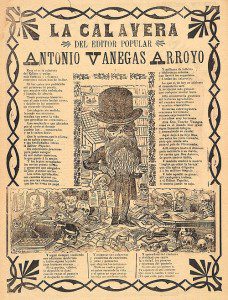 Having one of the few successful left-wing revolutions of the 20th century, art and rebellion are so closely intertwined in the history of Mexico perhaps more than anywhere else in the world. This paper seeks to explore the role of printmaker José Guadalupe Posada, as well as other artists working in the medium, in the Mexican Revolution. Through creating satirical portraiture used in newspapers and popularizing skeletal imagery that had been in use since the pre-Columbian era, he has become a prominent symbol of Mexicanness. These newspapers served both to poke fun at and make sense of the changing political climate, but also to demonstrate popular public opinion. Despite the medium of mass-produced and distributed newspapers being inherently communist, political cartoons were also a way to communicate to the illiterate general public and working class. This is most evident in his Calaveras, which were caricatures of prominent political figures as well as members of different social classes in the form of skeletons. Conclusively, his body of work not only fueled and informed the public during a time of revolution, but has also created a lasting legacy for modern Mexican artists Mexican artists. Los Tres Grandes (Diego Rivera, José Clement Orozco, and David Alfaro Siqueiros) all recognized the prominent influence that Posada had on their work. The imagery associated with his Calaveras is still prominent in Mexican art and media to this day, often in the context of inciting political change. 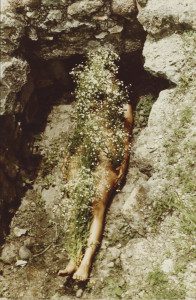 A Life Lived in the Service of Passion: Ana Mendieta’s Activism – Elizabeth Baker

The intent of this thesis is to analyze the life and art of Cuban-American artist Ana Mendieta, and to determine the ways in which her political and spiritual beliefs may be reflected in her art work. In this research, Mendieta’s early life, her expressions of displacement and marginalization, the rise of her career as a student in Iowa in the early 1970s, her frequent trips back to Cuba and her sudden death are all explored. Also discussed is Ecofeminism as both a movement and a theory, as well as the Afro-Cuban religion, Santería, and how elements from both of these manifest in Mendieta’s art and impacted her life.   Formal analysis of Mendieta’s artwork and contextual analysis of Mendieta’s life, the history of the ecofeminist movement in the United States during the 1970s, as well as the history and practices of Santería, are all explored through this research. 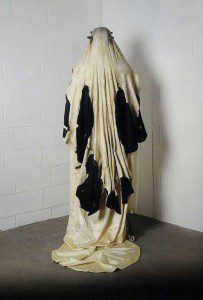 This presentation intends to analyze Dorothy Cross’s sculptural, installation, and video works in relation to Ireland’s Post-Conflict struggle with its cultural and global identity. Throughout the course of history, Ireland’s identity has always been in question, sparking new interest over the last thirty years in producing an Irish identity discerned by “hybridity, multiplicity, and mobility.” Declan McGonagle states that the traditional Irish constructs of gender and sexuality were primarily challenged by Dorothy Cross during this period of rapid sociopolitical change. Cross consistently deconstructs pre-Christian Mother Ireland and patriarchal Catholic Ireland in her early sculptural works, and ultimately transitions towards communicating a collective identity rooted in loss and desire. The constructions of gendered, cultural, and collective identity are dismantled across multiple media throughout Cross’s oeuvre, which can be analyzed through a synthesis of poststructuralist, deconstructive, and French feminist theories. In evaluating Dorothy Cross’s destabilization of identity, I will expand the literature on contemporary Irish art during the nation’s turbulent time of globalization, which has been underemphasized in the study of contemporary European art. 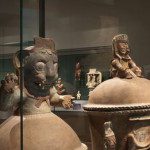 This research paper explores the idea that fine art museums are inadequately displaying artifacts that they’ve acquired and displayed in their personal collections. The traditional placement of artifacts using bland, minimalist, atypical display environments and curation techniques that are devoid of contextual or cultural background is usually how most artifacts are displayed in the accepted approach to curating Mesoamerican artifacts in fine art museums. As a result, curators fail to appropriately inform the general populace on the intricate aspects of Mesoamerican culture without losing the essence or the significance of the pieces displayed. As curators attempt to determine which approaches to displaying Mesoamerican artifacts are most appropriate and effective, several aspects must be examined; these include acquisition of the most recent and informed prerequisite knowledge of modern curating methods, what these aspects entail, and the manner in which they are successfully accomplished. The consideration of what is involved in properly displaying these artifacts and the manner in which appropriate curation preserves the cultural integrity of the artifact and its significance to its indigenous peoples is extremely important. This paper also seeks to discuss, in particular, the ideas of Paul O’Neill, author of “The culture of curating and the curating of culture(s)”, who argues that curators of modern museums take the on the role of artist in their handling and display of various artworks regardless of the original meaning behind the particular piece.