Five staff members from the College of Arts and Humanities have been nominated for the university’s A&P Gabor Award: Gary Brown, Mariana Chao, Trisha Farmer, Patty Hurter, and Mannong Pang. The Gabor Award, which is sponsored by The Gabor Agency, was established to recognize and reward the outstanding job performance of a selected Administrative & Professional (A&P) employee. The honoree, selected annually, will be announced during the Annual Employee Awards Program, and will receive a check for $2,500.

Come cheer them on at the Annual Employee Awards Program, 2:30-5pm in the Student Union Pegasus Ballroom.

Gary is the Production Manager for School of Performing Arts – Theatre. Gary started with Theatre UCF in 2014. He helps manage all of the theatrical productions, student production assignments, facilities scheduling of the Performing Arts Center and Theatre buildings, and much more. He is also on the UCF Celebrates the Arts Steering Committee.

Mariana is the Academic Support Services Coordinator with the University Writing Center. Mariana started with the UWC in 2014 after being at the university since 2007.

Starting at UCF in 2006 and beginning her role in 2009, Trisha’s primary responsibility is to help coordinate the College of Arts & Humanities graduate academic programs. Duties include graduate enrollment management, assistantship support, and being a liaison between the departments and the College of Graduate Studies.

Patty is the Assistant Director of the Texts & Technology Doctoral Program. Patty began in the Dean’s Office in 2006, and has contributed to the rapid expansion and growth of the program exponentially. This year she is happily making transition plans for retirement.

Mannong began at CAH in 2014 after previously working in the College of Education & Human Performance. On the CAH web team, Mannong participates in developing, testing, maintaining, and supporting college web-based application including analysis, design, content, programming and integration of interactive web processes. 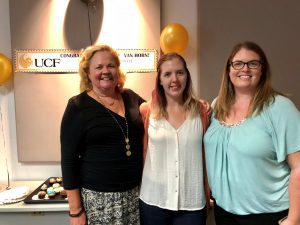 And, last but not least … Ashli Van Horn – Dean’s Office