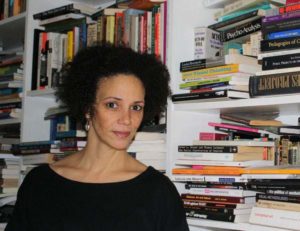 Coco Fusco, Professor and Banks Preeminent Chair in Art at the University of Florida, is a Cuban-American interdisciplinary artist and writer. She is the author of English is Broken Here: Notes on Cultural Fusion in the Americas (1995), The Bodies that Were Not Ours and Other Writings (2001), Only Skin Deep: Changing Visions of the American Self (2003), A Field Guide for Female Interrogators (2008), and Dangerous Moves: Performance and Politics in Cuba (2015). Recipient of the 2016 Greenfield Prize in Visual Art, a 2014 Cintas Fellowship, a 2013 Guggenheim Fellowship, a 2013 Absolut Art Writing Award, a 2013 Fulbright Fellowship, a 2012 US Artists Fellowship and a 2003 Herb Alpert Award in the Arts, Fusco’s work explores the relationship between women and society, war, politics, and race. Fusco will screen her latest film followed by Q+A.